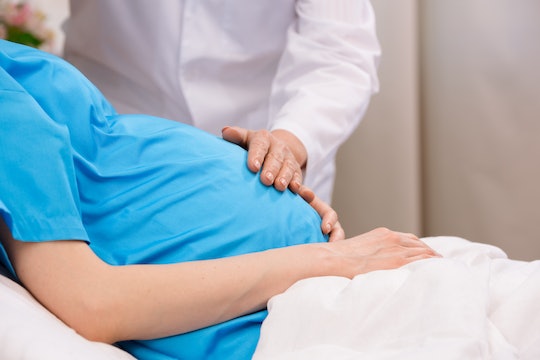 The effect of pollution in regards to fetuses has been explored before, with numerous studies highlighting how dirty air can potentially lead to birth defects and premature births. Adding to this concerning research is UCLA's new study linking climate change to shorter pregnancies, which used data to prove how changes in our environment could potentially alter the typical gestation period.

To support their findings, researchers analyzed U.S. birth and climate statistics from 1969 to 1988, using data from the National Vital Statistics System and data from the Global Historical Climatology Network, according to a UCLA press release. It was discovered birth rates rose during particularly hot days with temperatures above 90 degrees Fahrenheit, and people were more than 5% likely to give birth on these days. Once temps cooled down, so did labor rates.

Going into labor on a hot day might not seem like a big deal, but it is when you consider a spike in temperature is linked to people giving birth prematurely. Births on these sweltering days "occurred up to two weeks earlier — and 6.1 days earlier on average — than they would have otherwise," according to the findings published in Nature Climate Change.

If measures aren't taken to reduce climate change, it's possible one out of every 100 births will be affected.

It's not exactly clear why women are more likely to give birth on hotter days, but it's possible "oxytocin, a hormone involved in the onset of labor and delivery, increases in the body when it’s hot," according to UCLA's press release. What's more? A spike in temps could possibly cause more stress, a possible factor in early labor.

No matter the reason, the end result isn't ideal for pregnant people. "That rise, then fall, indicates a forward shift or an acceleration of deliveries and ultimately a loss of up to two weeks gestation for those births," Alan Barreca, a UCLA professor of environment and human health and lead author of the study, told NBC News. "If you calculate the average, it's a loss of about six days gestation." And a loss of six days is "enough to take somebody from what’s considered to be a pretty healthy pregnancy into a ‘we are somewhat worried’ pregnancy,” Barreca said in the press release.

Of course, the ideal situation is to have international and domestic policies in place to protect the environment. But in the meantime, Barreca advises pregnant people to seek out air conditioning to "mitigate" the effects of climate change. And although this advice seems reasonable for health concerns, air conditioner use has been proven to negatively affect the environment. Talk about a vicious cycle.

The only solution here is for politicians and stakeholders to genuinely invest in measures to reduce climate change. Until then, pregnant people are potentially at risk for going into labor early due to rising temperatures.