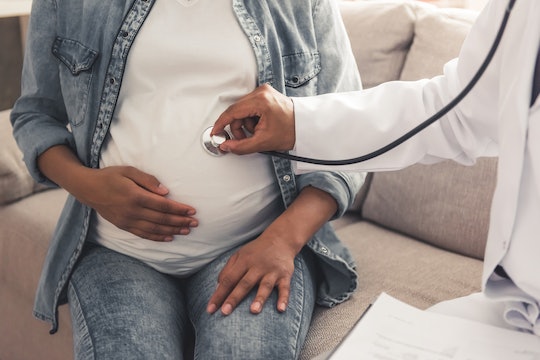 Though there are many pregnancy "rules" that can be debated, there's one that seems to be universally understood: pregnant women and heat do not mix (and truly, if you have any doubts about this, talk to someone in their third trimester in the middle of August, they'll tell you). Aside from issues of obvious discomfort, exposure to extreme heat is actually potentially pretty dangerous for unborn babies. New research says that climate change may cause congenital heart defects in babies, and yeah, it's as serious as it sounds.

Last week, the Journal of the American Heart Association released a new study that explained how exposure to hotter temperatures in the early weeks of pregnancy actually may increase the baby's chance for fetal abnormalities. The researchers explained that exposure to heat can "cause fetal cell death or interfere with protein synthesis via heat‐shock proteins and induce severe fetal malformations," per CRTOnline.org, as was observed in studies with pregnant animals. The big issue, of course, is not just issuing more warnings about ensuring pregnant women don't spend time in a sauna. The issue is that these ongoing defects could be a consequence of climate change, global warming, and temperatures that are gradually, but steadily, ticking upward.

Of course, it goes without saying that human beings were not designed to live above certain, reasonable temperatures. This is changing, of course, thanks to our interference with our environment because of pollution and overpopulation.

The study explained that as global temperatures rises, "more intense, frequent and long-lasting heat events" are to be expected, which is an issue because they can be sporadic and non-local, meaning they can occur in places where high temperatures are not often reached. (Despite what our president may argue, one of the first and most significant signs of climate change is erratic weather patterns, according to the National Climate Assessment, such as what's been experienced in America over the past few years.)

Why is this important? Well, because pregnant women unconditioned to these types of temperatures are probably not going to be prepared, and it's impossible to assume that they could just simply sit inside an air conditioned room until the temperatures gave way. Women have to go on, you know, living their lives, making this a more pressing issue.

The new research adds to what's previously been discovered, which is the fact that high temperatures reduce the chances of a mother being able to carry her baby to term, CNN reported.

Dr. Shao Lin, a professor in the School of Public Health at the University of Albany and an author of the study, shared with the network:

Our findings underscore the alarming impact of climate change on human health and highlight the need for improved preparedness to deal the anticipated rise in a complex condition that often requires lifelong care and follow-up ... Although this study is preliminary, it would be prudent for women in the early weeks of pregnancy to avoid heat extremes similar to the advice given to persons with cardiovascular and pulmonary disease during heat spells.

Be this as it is, it doesn't mean that there's nothing expectant mothers can do to mitigate climate concerns. First and foremost, knowing that higher temperatures pose a risk to the fetus can help moms know to stay inside, keep drinking cold water, and to maybe not spend hours at the beach during a heat wave.

Beyond that, it's yet another rally call to take our ecology more seriously, and to put a microscope to the long-term damage, and consequences, our actions will have not only for ourselves, but for our children, our children's children, and multiple generations down the line.