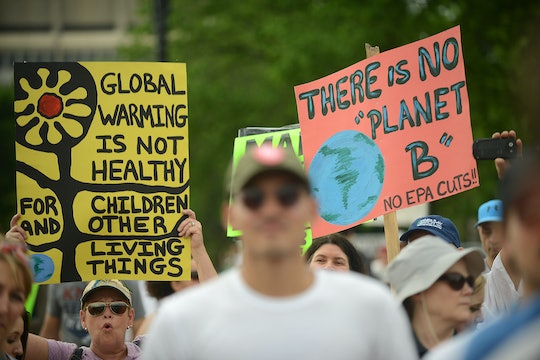 Some 300,000 teachers have been singled out by the Heartland Institute, a conservative nonprofit, in a new campaign challenging accepted climate change science. In efforts to spread mis-information, climate-deniers are mailing teachers "alternative" science materials, including a cover letter, a 135-page book, and an 11-minute DVD, BuzzFeed News reported. Romper has reached out to the Heartland Institute for comment but has not yet heard back.

I am writing to ask you to consider the possibility that the science in fact is not "settled." If that’s the case, then students would be better served by letting them know a vibrant debate is taking place among scientists on how big the human impact on climate is, and whether or not we should be worried about it.

“The intent," Lakely shared, "was to make sure teachers were aware that there was alternative scientific research." Lakely claimed that he had received positive responses to the material, and that the group had classroom visits set up for the upcoming school year.

Other classrooms, however, reject the propaganda. "I’m appalled at the Heartland Institute’s gall to think we are dumb enough to buy into this," Colorado science teacher Cheryl Manning insisted. Her place of work, Evergreen High School, was sent enough "science" kits for its entire staff. Problematically, the textbook appears based in research. "But it’s circular. It’s all self-citation," Manning observed: "Citing their own stuff instead of citing other people’s work." Any teacher will tell you — citing just yourself won't earn a passing grade.

Four Democratic senators have protested the mailings, writing a letter to Secretary of Education Betsy DeVos to let her know of their disapproval. In the same letter, the senators also asserted that DeVos lands "on the side that argues, incorrectly, that climate change science is not settled.” These remarks come after DeVos patted President Donald Trump on the back for pulling out of the Paris Agreement — a non-binding, worldwide commitment to respecting the Earth that all countries — save the United States, Nicaragua, and Syria — support.

You've heard the consensus on climate change repeated again and again, but perhaps it's worth hearing one more time: 97.2 percent of scientists in a peer-reviewed study agree that humans have caused increased global warming. It's pretty much undisputed at this point, but nonprofits like Heartland — fueled by a president's steadfast preference of fossil fuels over environment — are still threatening to infiltrate schools with their unfounded "research."

Targeting young minds like this is just irresponsible, and whereas educators might understand that, subjecting kids to the same misinformation is just flat-out dangerous.