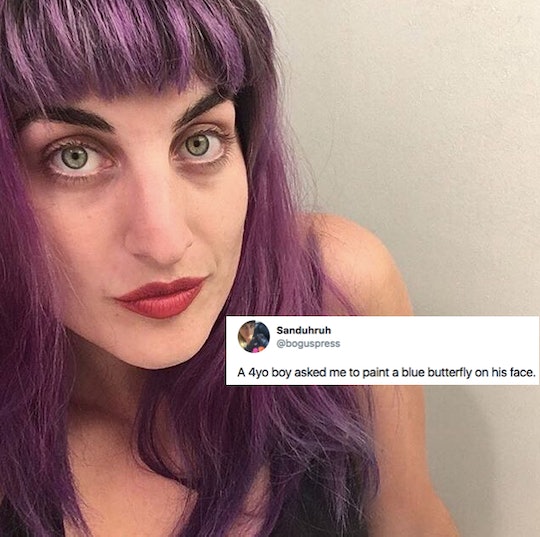 "Toughen up." "Be a man." "Don't act like a girl." These seemingly innocuous sentiments put a dangerous pressure on young boys to think and act in accordance with outdated gender roles. And one woman, who works as a clown and face painter at events, witnessed this archaic opinion rear its ugly head. Over the weekend, in a series of tear-jerking tweets, she detailed what happened when a little boy wanted a butterfly painted on his face, but his parents wouldn't let him and they wanted him to have something more "masculine." The boy left the picnic with a skull on his cheek. And this clown's take on it all show just how toxic masculinity hurts our sons on so many different levels.

According to Merriam-Webster, the word "masculinity" means "having qualities appropriate to or usually associated with a man." While the definition itself is short and apparently simple, its cultural implications are vast and varied. In particular, the words "appropriate to" raise questions such as, who decides what qualities are appropriate for a man? And who is it that is associating these qualities with them?

Hypermasculinity is the belief that in order to be a man you must in no way resemble a woman; being even remotely feminine strips you entirely of your masculinity. This then means that conventionally feminine traits such as tenderness, compassion and empathy are strictly off limits.

It seems that not even young boys are safe from the pressures of such toxic masculinity. And this clown in particular, known on Twitter as "Sanduhruh," detailed her experience at a picnic and the painful front-row-seat to these pressures that she (and a 4-year-old boy) received while painting the little boy's face.

She explained her beliefs on how the imposed refusal of anything "elegant" or "beautiful" for little boys leads them to a life of celebrating violence.

Here's what happened: At the picnic, the little boy requested that she paint a blue butterfly on his face. Before she could grant his adorable request, the boy's mother chimed in and told her that she wanted something else instead. Our friendly neighborhood clown attempted to plead the boy's cause, but his mom wasn't having it. *Insert gender norms here.*

After this exchange, things got even worse. The boy's mom then turned to the boy's father and asked if he wanted his son to have a butterfly painting on his face. His dad also shot down the idea. Sanduhruh pointed out in her tweets that the husband's masculinity is being brought into the equation in a completely unjustified way.

Despite the boy's wish for a butterfly, this clown was forced to paint a skull and crossbones on his face because it was more "appropriate." Something as fun and lighthearted as a face painting became some sort of warped lesson in manhood. When she finished, Sanduhruh tried to get a bonus painting in there of a butterfly for the boy, but mom put a stop to that, too.

As it was pointed out toward the end of this series of tweets, the issue here is larger than the single instance involving the face painting. The issue is that little boys are being robbed of the pleasure of enjoying beautiful things. They are being forced to pretend not to like the things that they like, such as butterflies, because their parents are uncomfortable with any deviation from the male version of "normal." They are being told that anything other than anger is "girly," and that is not OK.

Sanduhruh is not alone in her outrage. A number of Twitter users responded to her tweets with their own stories of toxic masculinity and the negative impact that it can have on young boys. One such user said:

You're surprised? So many times I've heard even openminded men & women say 'he likes fashion/opera/Britney Spears, must be gay.'

Experts, too, have spoken out about the dangerous effects of toxic masculinity. One study published in The Journal of Social Psychological and Personality Science suggested that the suppression of emotions, which is deemed appropriately masculine, can lead to aggression later in life. And the fact that masculinity is so often praised, whereas femininity is seen as something to be oppressed, many young boys are put on a path towards misogyny.

While Sanduhruh's story is composed of a single incident, it is representative of a dangerous epidemic. So, yes, let's let boys be boys — however that presents itself.