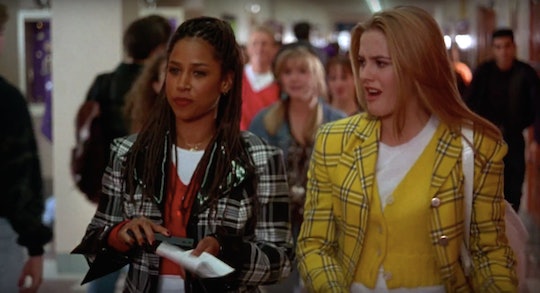 OMG You Guys, 'Clueless' Is Coming Back To Theaters & We're Totally Buggin'

Break out your tiny sunglasses and white collarless shirt from Fred Segal! In celebration of the film's 25th anniversary, Clueless is returning to theaters across the country this spring. For just three short days, viewers can fawn over Cher's timeless fashion sense, dog Dion for his many blunders, and cheer on as love blossoms up and down the hall of Bronson Alcott High School.

Clueless is a loose adaptation of the Jane Austen novel Emma, and follows Cher, played by Alicia Silverstone, a stereotypical L.A. rich girl who tries to make over the school's new girl Tai, played by Brittany Murphy. Much like in the novel that inspired it, Clueless' heroine fails to see that her perfect match has been in front of her the whole time. Spoiler alert: it's Paul Rudd. An instant hit, the 1995 film grossed $56.6 million at the U.S. box office and quickly became a cult classic that has been inspiring Halloween costumes and theme parties ever since, according to E! News.

Fathom Events and Paramount Pictures will air the film May 3, May 4, and May 6 at approximately 700 North American theaters. Along with the timeless tale, the showings will include a special pre-show presentation that breaks down the film's memorable slang. Tickets for the Clueless 25th anniversary theater screenings are available now on the Fathom Events website.

If the theater screenings aren't enough to get you dressing in plaid, a whole new Clueless TV reboot is on its way from CBS Television Studios, according to Entertainment Weekly. The show will explore what life at Bronson Alcott High School would be like if Cher weren't around and her BFF Dionne (played by Stacy Dash in the film) took her place. The plot has been described as "a baby pink and bisexual blue-tinted, tiny sunglasses-wearing, oat milk latté, and Adderall-fueled look at what happens when the high school Queen Bee (Cher) disappears and her life-long No. 2 (Dionne) steps into Cher’s vacant Air Jordans." Sign me up!

The later generations of Clueless fans likely missed their first opportunity to catch the movie in theaters — I, for one, was still working on potty training when Cher was working on Tai's "buns of steel." But whether you're a new fan or old, when asked if you'll be skipping the screening, your answer should be, "Ugh, as if!"