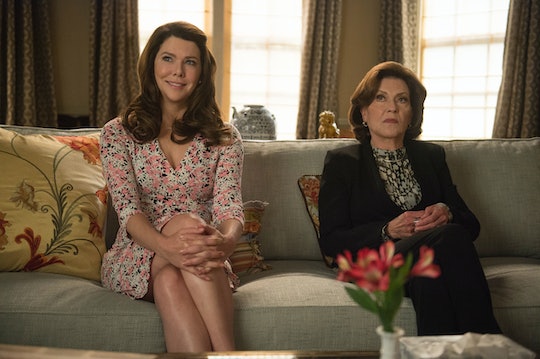 As soon as those final four words were uttered on Gilmore Girls: A Year in the Life, fans immediately wanted more and started wondering whether or not a Season 2 of the Gilmore Girls revival could be in the works. And while that question has yet to be officially answered, it's worth noting that it also hasn't been outright denied either, which has definitely left some fans optimistic that there might be more Stars Hollow goodness to come. In fact, I'd even go so far as to say that there have been multiple clues that a Season 2 of the Gilmore Girls revival will happen eventually.

Granted, it might not be quite as elaborate as this Netflix installment has been as far as special guest stars and cameos go. (I see you, Parenthood stars!) And it might be difficult to get quite as many of the original stars back for a second go-around, depending upon their schedules. But that doesn't mean the series couldn't make it work nonetheless. And as much as it pains me to say this, it might even be a good thing if not everyone could return since it would allow other characters to get more screen time rather than having to share it among so many others. And if these clues are any indication, a second installment could kick-off a lot sooner than you'd think...

In Graham's newly released memoir, Talking As Fast As I Can, she talked about that jaw-dropping ending, calling it more of a "cliffhanger" than anything else, which kinda suggests she thinks there should be more to come. She also went on to tease her readers in a very Lorelai-type way. "We waited a long time to get the chance to finish this show, and now, finally, Gilmore Girls is really and truly over," the actress wrote. "I mean, it is over, right? Yes. It is. It's over. But seriously, didn't you sort of think that ending was really more of a cliffhanger? Hmmmm..." It certainly sounds like she'd be up for more.

The Cast Seems To Want More

Graham isn't the only one who sounds excited at the prospect of more episodes in the future. Scott Patterson, who plays Luke, recently told The Hollywood Reporter that "It'd be nice to do it every year," while Matt Czuchry, who plays Logan, told E! News that "If this is the end, it's a great ending and if there's more, it'll be another great ride." Sure, that's not an outright confirmation, but just the fact that they seem so open at the possibility of return is enough to make any fan leap for joy.

During a recent chat with The Hollywood Reporter, Sherman-Palladino was asked whether or not this was the end of the road for the Stars Hollow gang, and her response left the option up in the air in order to see how the revival would be received first before making a final decision. She stated:

Make of that what you will.

There Are Still So Many Unanswered Questions

Who is the father of Rory's baby? What does she plan to do next? Is there any weight to the surrogacy theory? What are Lorelai's thoughts on all of this? Too many storylines have been left unresolved for that to just be the end.

These characters deserve more, and quite honestly, so do we.