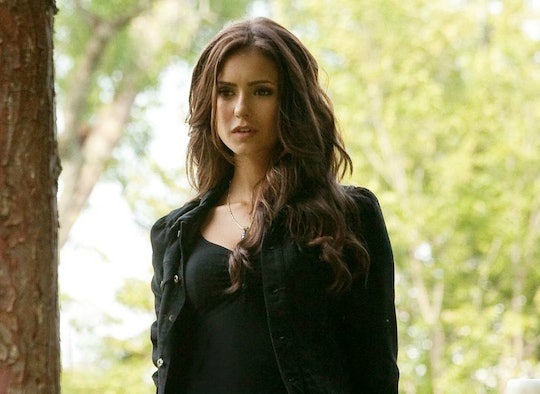 Katherine's 'TVD' Return Will Be Epic

I'm not fully prepared for the end of The Vampire Diaries, but it's coming soon whether I like it or not. With just two episodes left (!!) before the long-running supernatural drama finishes its eight-season run, teases from cast and crew have revealed that viewers have plenty of former castmember returns to look forward to. One such return (arguably the most anticipated) is Nina Dobrev's. Dobrev played several TVD characters over the years, but the one fans are chattering about isn't who you might think. Forget Elena Gilbert; clues about Katherine's return to The Vampire Diaries are what's sending Kat-fans into a tailspin.

As any loyal TVD viewer is well aware, Katherine was the best of Elena's various doppelgängers (not that Amara or Tatia ever had enough screen time to become interesting). Cunning, sassy, often evil, but ultimately somehow still sympathetic, there's a faction of fans out there who legitimately like Katherine better than Elena. For that reason, the big reveal at the end of last Friday's episode had watchers shook, to say the least.

After Stefan finally killed Cade, the actual devil, Kai (now trapped by Bonnie in yet another prison world) used what were probably his final moments of screen time to reveal quite the shocker to the former witch. As Bonnie related to Damon, hell hadn't actually been destroyed when Cade died — it just changed hands. In the power vacuum left behind after his demise, the group's original foe Katherine had apparently assumed leadership. Because of course she would do that.

When Dobrev finally confirmed her long-rumored return to the show for the series finale "I Was Feeling Epic" back in January, many just assumed that she'd be stepping back into Elena's shoes. After all, the show can't end without its original main character reunited with her friends, family, and, most importantly, Damon — right? Dobrev has been teased in the finale promo videos as Elena (or so it seems), so that character's return is pretty much a lock. But what about Katherine?

Elena's Petrova predecessor was last seen being sucked away into the darkness after Bonnie was unable to let her pass over to the Other Side. In retrospect, it makes all the sense in the world that she was in hell. In an informal Twitter Q&A showrunner Julie Plec confirmed for fans that Katherine will be seen again before TVD takes its final bow.

In the same Q&A she also teased this alarming little spoiler as well:

Wonder if Katherine has anything to do with that main character death? Now that the season's original Big Bad Cade is gone, there's really no one else I can think of who would want to kill anybody.

So, straight from the TVD head honcho's tweeting fingertips, Katherine is definitely going to grace our screens once again. But when? Promos for the upcoming episode of the show, featuring the highly-anticipated Stefan/Caroline wedding (doubling as bait to draw Katherine out), seem to hint that Katherine will be making her appearance there. On the flip side, as far as we know, Dobrev is only appearing in one episode — the finale — and no more than that. While it's possible that she'll surprise everyone by appearing as Katherine in the penultimate hour of the show, I have another theory.

I think Katherine will remain hidden until the finale — and then pull off one last posing-as-Elena trick, before Elena actually awakens for real.

One of the most recently released TVD promos (above) saw the emotional reunion of Damon and Elena. Personally, I'm convinced that that's not actually Elena but Katherine, and that this is her one last fake out. I don't fully believe that the show would give us the big Delena reunion in a 15-second clip this much in advance of the actual episode.

Whether Dobrev appears as Katherine in only the final episode, or makes her big return on Friday's "We're Planning a June Wedding," one thing's for sure — fans are definitely excited to see her again.