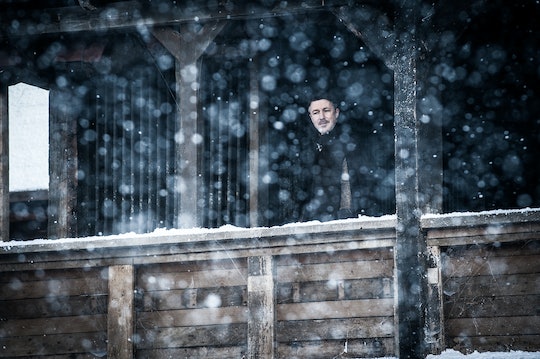 Arya has momentarily abandoned her kill list on Game of Thrones as she heads north to Winterfell to reunite with her family, but she might not be able to escape her killer instincts once she's home. Some fans have begun to wonder if she could be the one to take out Littlefinger once and for all — because let's face it, someone has to. His manipulations have led to more strife for the Starks than they know, and it's about time to put an end to his influence. It may just be a theory, but there are potentially major clues that Arya will kill Littlefinger on Game of Thrones — especially one element in particular.

In a recent Entertainment Weekly cover story dedicated to the Starks, Arya was wearing a very distinctive dagger on her belt. It was clear that it wasn't Needle, Arya's signature weapon since the first season. But a closer look revealed that it wasn't just any dagger, either: it was Littlefinger's. It's possible, of course, that a cool-looking dagger was selected for the photograph for aesthetic reasons, but it could also be hinting at the turn Arya's storyline will take once she arrives home. The dagger has a storied and significant history too big to dismiss, which is why it might be an important clue.

The dagger first appeared in Season 1 during the assassination attempt on Bran while he was still comatose. Catelyn helped stop the attack and then took the dagger as evidence, eventually passing it on to Ned. After Ned's death, the dagger has only been seen in Littlefinger's possession, indicating he took it as a trophy in the aftermath. There would be some kind of symmetry in Arya killing Littlefinger and then taking the dagger from him, revenge for what he did to her father.

The trouble is, Arya doesn't actually know the full extent of what Littlefinger has done to her family because she's been gone for so long. His betrayal of Ned, murder of their Aunt Lysa (no great loss, but still), and handing over of Sansa to the Boltons are all vengeance-worthy, provided Arya finds out about all of it. The newly omniscient Bran could certainly give Arya the Cliffs Notes on all of Littlefinger's misdeeds once she returns home, but until then she doesn't have much of a motive outside of the general feeling everyone has that Littlefinger should die.

If Arya is dedicated to sticking to her list, then Littlefinger is safe from her because he's not on it. But that could easily change in the future as soon as she gets more information. The fact that Arya might gain possession of Littlefinger's dagger could be the biggest clue that seals his fate. Add that to the fact that she's already been on one major killing spree this season (bye House Frey, no one will miss you) and I wouldn't be shocked if that murderous tirade continued. If Littlefinger does die in Season 7, then there's a chance Arya will be the one wielding the blade.