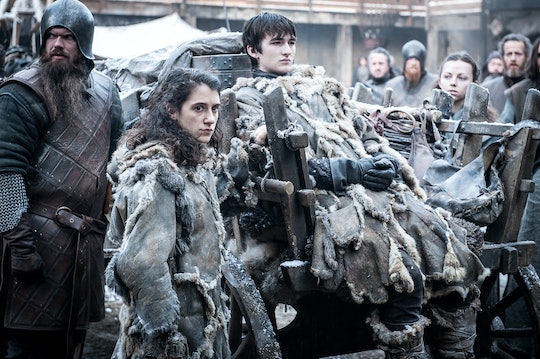 Clues Bran Is Becoming The Ultimate 'Game Of Thrones' Villain

Every character on Game of Thrones has undergone major changes over the years, but no one's transformation was quite as dramatic as Bran Stark's. He left his former identity in the dust to take on the mantle of the Three-Eyed Raven, going from a curious little boy to a solemn and cryptic young man. His path has taken a considerably dark turn, but some fans think it could get even darker. There is a theory that Bran becomes the very enemy he is trying to defeat: the Night King himself. These clues that Bran is the Night King on Game of Thrones indicate that Bran's transformation might not be over just yet.

At first glance, the idea that Bran could become the Night King sounds a little too random to believe, even for this show. How does one go from tree psychic to ice zombie, especially when said zombie is already thousands upon thousands of years old? It might actually be a more plausible transition than one would think; in fact, Bran's powers could be the very thing that trap him in an icy future. But if you need more proof, I don't blame you. Here are some potential clues to back up this shocking claim...

Babe With The Power

Bran's ability to warg into the minds of others means that he could really become anyone — and maybe even get trapped in their consciousness if he's not careful. So while Bran himself isn't likely to grow up and turn into the Night King, he could warg into the person who does.

Blast From The Past

And that's even more plausible because Bran knows exactly who became the Night King. He witnessed the King's creation at the hands of the Children of the Forest. He saw them take one of the First Men and plunge obsidian into his heart, birthing the very first White Walker. As Reddit user hi_austen speculated, perhaps Bran could go back to that vision with the intention of stopping what happens, and end up warging into the man right at the worst moment.

The Call Is Coming From Inside The House

A line from Leaf, one of the Children, could imply something like this. Leaf defended the creation of the White Walkers by saying, "We needed to defend ourselves...from you. From men." While she could have been making it clear that Bran's ancestors were responsible for the events that led to the White Walkers' creation, she could have also been speaking more literally. Though why the Children would turn Bran into an immortal monster to protect themselves from him is beyond me.

Back To The Future

Bran has also been shown to have an impact on the past. His warging into Hodor in the past was the very thing that caused him to become Hodor, because before Bran's meddling he was a young boy named Wylis with all his faculties. If Bran could make that happen, why not set off his own transformation into someone else?

The Man In The Mirror

But perhaps the biggest indication that there's some kind of connection between Bran and the Night King is that the King was able to see Bran in a vision and touch him. Perhaps he was able to do so because he and Bran are actually the same person.

Bran might not be the Night King, but there is a possibility that their strange connection goes deeper than viewers know.