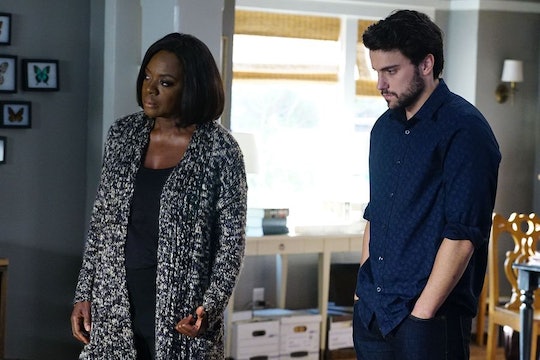 Connor May Still Be Innocent On 'HTGAWM'

The season finale of How to Get Away with Murder is almost here and it's time fans finally found out who killed Wes. At this point pretty much everyone's still a suspect, but last Thursday's episode seemed to point to Connor being the real killer. Oliver discovered that Connor was actually at Annalise's house the night it blew up and then (through one final flashback) viewers saw Connor giving an unconscious and possibly dead Wes what appeared to be CPR. Still, even though all signs point to his guilt, there's still plenty of clues Connor didn't kill Wes on How to Get Away with Murder.

Since the winter premiere, fans have noticed Connor has been acting different. He's been cold, suspicious, and on edge ever since it was revealed Wes was dead. Not only that, but he seemed eager to point the blame towards everyone but himself, which Asher and Michaela began to find suspicious. Then there's the added fact that Connor did threaten Wes before he ended up dead. Honestly, if Connor had been arrested for Wes' murder, his case wouldn't be looking so great right now. In fact, he looks positively guilty. However, that doesn't mean he is. Looks can be deceiving, especially on this show, and these clues prove Connor is actually on the side of innocence.

On How to Get Away with Murder, it pretty much goes without saying that whoever the show wants you to believe is the killer, usually isn't. It's a classic bait and switch. The fact that they're trying to make it seem like Connor really killed Wes pretty much guarantees he did no such thing. No doubt it'll be someone unexpected to leave fans shocked.

Connor Was Trying to Save Wes

If Connor really killed Wes why would he have tried to revive him? In the flashback at the end of last Thursday's episode, Connor's clearly trying to bring Wes back to life, not kill him. It's more likely that Connor arrived at the house after Wes was killed, saw that something was wrong, and then tried to save him. The only real question is why didn't Connor call the police or take Wes to the hospital? Why did he leave him there and let his body burn in the house? Did Connor set the house on fire? These are the questions fans should be asking.

The Timing Seems Off

It's pretty difficult to pinpoint a concrete timeline with this show, but I'm going to try. Wes left the police department and got in the car with Frank. At the same time, the rest of the Keating Five were still celebrating the end of the term and then went to Michaela's apartment. After Wes left Frank, he got in a cab and then ended up at Annalise's house and guess who was there? Nate. Why is no one suspecting Nate? Anyway, at some point Laurel arrived at the house and was still there when it blew up. However, she said she saw someone running out of the basement before the explosion and that person was probably Connor.

Based on the fact that Wes already looked dead when Connor appeared with him, it would seem likely that he died before Connor and Laurel arrived, which means the only other person in the house with Wes before he was killed was Nate. Hypothetically speaking, of course. Therefore if you're going to suspect anyone, it should really be Nate.

Whoever killed Wes, the truth will finally be revealed when the two-hour season finale of How to Get Away with Murder airs on Thursday, Feb. 23 at 9 p.m. ET on ABC.