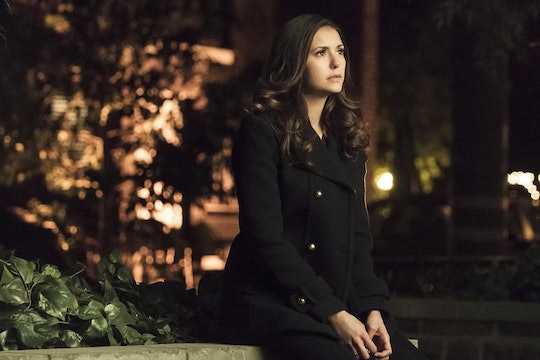 A lot has happened so far on Season 8 of The Vampire Diaries. Stefan has reverted to his Ripper ways, Damon has basically submitted to his Siren-esque lifestyle, and Sybil is continuing to cause trouble throughout Mystic Falls. But if there's one thing that's remained the same throughout this final installment, it's the collective fan belief that Nina Dobrev will return to The Vampire Diaries as Elena Gilbert before the show says goodbye for good. But is this just a pipe dream or will our former leading lady grace us with one last appearance? From where I'm sitting, I'd say the odds seem in our favor.

From the beginning, it's made sense to think that Elena will come back for a final visit. After all, she was the main star of the show for so long, it'd be weird not to include her in this last hurrah. But Season 8 has been filled with implications that Dobrev is certain to make her way back to the show. Not only have the characters brought up her name constantly (there isn't an episode that goes by without recalling her via flashback or talking directly to her in a diary), but now Sybil is going so far as trying to replace her in Damon's memories just to mess with him. So Elena needs to get back here and rectify the situation.

According to the synopsis for this Friday's episode "The Simple Intimacy of the Near Touch," Sybil will be back at it once again, causing trouble and even going so far as to mess with a big moment in Delena's history: the Miss Mystic Falls pageant. The full episode description can be found below:

Stefan and Damon return to Mystic Falls at Sybil's request as she still searches for the historical artifact; Bonnie returns from Paris wearing a vile of Enzo's blood, which makes Caroline wonder if Bonnie will become a vampire; Stefan, Damon, Caroline, Bonnie and Enzo attend the Miss Mystic Falls pageant; Sybil taunts Damon with memories of Elena.

As any diehard fan knows, the Miss Mystic Falls pageant was where Damon and Elena danced together, which sent sparks flying in all directions and proved that they were the true TVD couple to watch. So the thought of Sybil tarnishing that memory is almost too horrible to bear. And with so much Elena imagery floating around, it stems to reason that she will eventually appear and help Damon remember all that they've shared. At least, that's how I hope this all plays out. Otherwise, it's just downright depressing.

Things may look bleak for Damon right now, but just as tightly as he holds onto his former flame's necklace, we will continue to hold onto the hope that Miss Gilbert will be brought back to us in some way or another. Damon needs her now more than ever, and quite honestly, so do we.