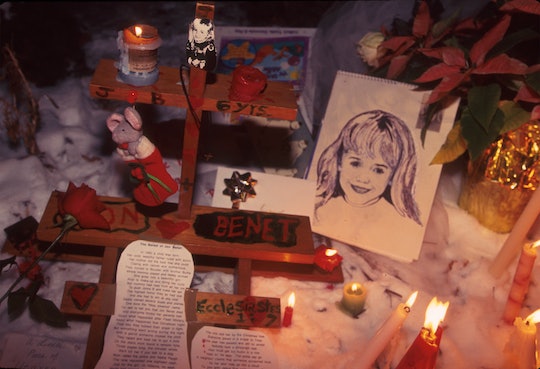 As the 20th anniversary of the still-unsolved JonBenét Ramsey murder approaches, it is reinvigorating speculation over seemingly insignificant details about the case. The 6-year-old pageant star whose name ended up splashed across tabloid headlines for years was found dead in her family's basement the day after Christmas in 1996, and to this day, no one has been charged with her murder. As armchair detectives fire up their televisions for CBS' new true-crime docu-series, The Case of: JonBenét Ramsey, though it's clues like the pineapple in the JonBenét case that highlight some key discrepancies between the Ramsey family's perspectives and the evidence gathered at the crime scene and leave everyone scratching their heads.

First, some background: Following her death, autopsy reports found undigested pineapple in JonBenét's stomach. According to Steven Pitt, a nationally recognized forensic psychiatrist in Arizona who worked on the JonBenét investigation, Patsy had "told investigators her daughter hadn't had any of the tropical fruit in the hours before her disappearance," People reported. "I did not feed JonBenét pineapple. OK?" Patsy asserted when questioned by Boulder authorities, staying true to her previous statement that, after the family returned home that night, her daughter went straight to bed. "I don't know how it got in her stomach," she said.

It's important to note, though, that the crime scene was not immaculate. In fact, Boulder Detective Lou Smit referred to it as "screwed up" in a 2012 Denver Post blog. Smit noted that, "the house should have been totally shut [after the crime]," implying that this negligence led to misinformation as well as a contaminated crime scene.

Theories about the pineapple are entirely speculative, as the Ramsey family was acquitted in 2008 due to DNA evidence. It does raise questions, though, as to the truthfulness of Patsy's statements, not only regarding the pineapple but in reference to other details, big and small. However, in a statement to Romper, Ramsey attorney L. Lin Wood reiterated that any notion Patsy or any other member of the family had been involved with JonBenét's death was entirely false.

"In terms of the accusations against John and Patsy Ramsey, the Boulder District Attorney, Mary Lacy, publicly exonerated them in 2008 based on irrefutable DNA evidence. She apologized to the family and assured them that in the future, they would be correctly treated as victims," he said. "The days of Ramsey accusations should have ended then and there." He added:

I also know that members of the media have profited to the tune of hundreds of millions of dollars from the tragedy of this family over the past 20 years and many hope to continue to do so at the present time as they attempt to duplicate the financial success of Netflix in its recent series, Making a Murderer. There is no new information or evidence or justification for the renewed coverage of the Ramsey case other than the media’s desire to make more money on the tragedy.

There are multiple avenues by which JonBenét could have gotten and eaten the pineapple, and Patsy insisting that there was no pineapple in the house—when her very fingerprints were found on the bowl—left many confused. For now, as no one was ever charged in JonBenét's death, it seems the mystery remains unsolved.