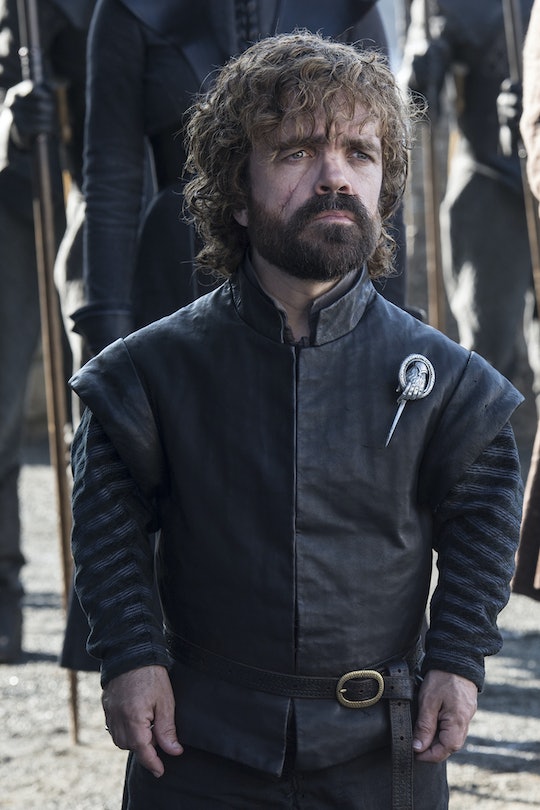 These 'GoT' Clues Suggest Tyrion Really Is A Targaryen

Game of Thrones is finally, actually close to returning after an extended break between Seasons 6 and 7 (the better to capture #WinterIsHere weather during filming, of course), and one of the biggest questions posed this season is whether a three-headed dragon actually lives. In this case, that prophecy refers to three Targaryens ready to take the throne: Daenerys, daughter of Mad King Aerys and Rhaella Targaryen; Jon Snow, son of Rhaegar Targaryen and Lyanna Stark; and Tyrion Lannister, possible son of Aerys and Joanna Lannister. There are definitely clues Tyrion is a Targaryen on Game of Thrones, but if you're having trouble keeping track of these hypothetical Targ family dynamics, here's a quick refresher.

Fans already know that Daenerys is Jon's aunt. Her brother Rhaegar impregnated Lyanna Stark, and then Ned raised her baby as his own bastard, Jon Snow. But if this theory about Tyrion being yet another secret Targaryen is correct, it would make Tyrion Daenerys' half-brother, and an uncle to Jon Snow. Not incidentally, since Tyrion could be Aerys' son and is older than Dany, he also has a claim to the Iron Throne, although he'd be fighting for it with the caveat of being a bastard. But potential ascendance aside, here are clues from the books and the series that Tyrion may indeed be a Targaryen.

The theory goes that Mad King Aerys named Tywin Hand of the King for the excuse to ship him all over the seven kingdoms while his bride Joanna was stuck all alone back in King's Landing. Some fans believe that this is when either an affair or rape resulted in Joanna becoming pregnant with Tyrion. Tywin then became so furious at what had transpired that he tried to drug Joanna in the hopes that she would lose the baby. But it failed and resulted in both Tyrion's deformities and Joanna's death during her difficult childbirth.

Why would the Hand of the King go behind his king's back and join Robert's Rebellion? Some speculate that Tywin betrayed Aerys not for power or because the king was mad, but as revenge for impregnating Joanna.

In spite of being his distant namesake, Tywin has denied his son in subtle ways several times throughout the course of the series. Because of their contentious relationship, these could easily be construed as the heated words of an angry father. But if you believe that Tyrion really is a Targaryen — and that Tywin knows it — then Tywin's "you're no son of mine," uttered right before Tyrion killed him, takes on a whole new meaning. Tywin also stripped Tyrion of his otherwise rightful claim to Casterly Rock as a Lannister, which might be because Tyrion isn't a Lannister to begin with.

In the books, Tyrion is described as looking more like a Targaryen than a Lannister. He's described as having the same white-blond hair that the Targaryens are known for, and he has eyes of two different colors, which is also a hereditary quirk of Targaryen bastards.

Daenerys heard a prophecy in the House of the Undying once that stated, "The dragon has three heads." Might this point to a tri-Targaryen rule? Dany, Jon, and Tyrion? Seems plausible.

It's widely believed that only Targaryens have that special touch that can tame and ride dragons without being incinerated. Guess who happens to not only be able to calmly chat with a dragon but also hop on for a ride? Skeptics speculate that Tyrion's ability might just be because he reads a lot and "knows things," but there's definitely room to interpret that he, too, is a Targaryen with power over dragons.

Fans spent all of Season 6 driving up to the very obvious conclusion of R+L=J, so don't expect this theory to be confirmed right away, but it seems like Tyrion's real parentage might be one of the poorly kept secrets Season 7 has in store.

You can tune into the Game of Thrones Season 7 premiere Sunday, July 16 on HBO.