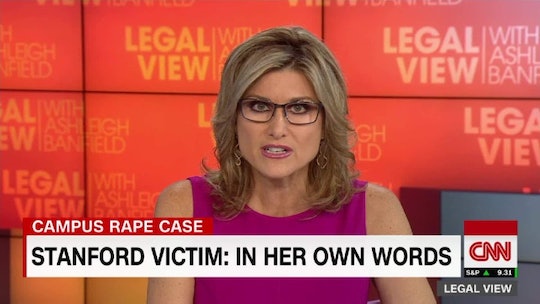 CNN Anchor Reads Stanford Rape Victim's Letter On Air, Because Everyone Needs To Hear It

The viral and distressing story of an Ivy League campus rape captured the nation's attention last week. The story itself has been a difficult and delicate one for the media to handle, but one major news network covered it in the most captivating way, when a CNN anchor read the Stanford rape victim’s letter on air. On Monday, Ashleigh Banfield, anchor of CNN’s Legal View, devoted more than half of her broadcast to the powerful letter written by the woman’s first-hand account of the sexual assault and how severely it is impacted life since.

The letter written by the victim — first posted by BuzzFeed News on Friday — has gone viral and has been shared by millions on social media. As of Monday, more than 5.5 million people have read the letter on BuzzFeed's site. Banfield wasn’t the first public figure to speak out: Celebrities such as Brie Larson and KT Tunstall have also shared their support for the victim. The gut-wrenching story has since ignited public outrage and controversy about consent and the legal system, which led to Banfield's decision to read the entire 7,244-word letter live.

Stanford swimmer Brock Turner was sentenced to six months in jail for the sexual assault of the unconscious victim behind a dumpster last January. Turner had originally faced a maximum of 14 years in prison, but the lenient sentence was chosen, according to a judge, because a longer sentence would have “a severe impact on him.”

Some portions of the letter were cut for length and some segments that detailed the rape were too graphic for television and needed to be left out completely. But, according to Banfield, it was important not to alter the graphic nature of her letter to be able to broadcast it.

"Changing or omitting her verbiage would have taken away from the meaning of what she was saying," Banfield said in the CNN Money interview on Monday. "And that is not in the interest of journalism."

Viewers have taken to social media to commend Banfield for her bold coverage, calling it “important,” “unprecedented,” and “remarkable.”

Even though the riveting broadcast was sometimes hard to listen to, it made it even more clear that rape on college campuses and everywhere else deserves more of a discussion. It was very bold and commendable for CNN to dedicate more than 30 minutes of airtime to this very important story, but the victim’s bravery and intrepid resilience from the beginning is truly honorable — and it was her words that led the news today.