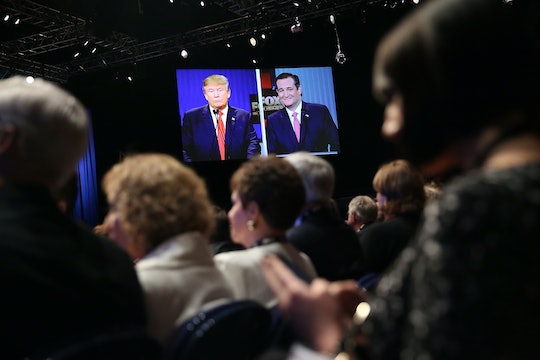 As though the drama onstage wasn't enough, news that CNN is replacing NBC for the next GOP debate, which will air Thursday, Feb. 25, has provided some behind-the-scenes intrigue as well. According to CNN, the decision was influenced by the Republican National Convention's (RNC) unhappiness over NBC News' handling of the third Republican debate, which aired on CNBC in October. As a result, the RNC's debate committee voted unanimously to end NBC's involvement in the upcoming debate.

CNN characterized this change as a "blow to NBC News and its journalists." The move was particularly discouraging because NBC News, which was slated for February's debate, is a separate organization from CNBC, the network that received so much criticism over October's debate. Both are divisions of NBCUniversal, but, according to CNN, they are managed under different teams, and even work out of two separate buildings in New York.

According to a written statement from RNC Chairman Reince Priebus, the debate will still be in partnership with Telemundo, which is owned by NBCUniversal, in addition to Salem Communications and the National Review. As for NBC News, though, the partnership is kaput. Tough luck for NBC, but tough luck for viewers, too, who might reasonably have expected a more interesting show from NBC that from the perpetually vanilla CNN.

Priebus wasn't shy in his opinions of the third debate. Shortly after it aired, he had this to say about it:

While debates are meant to include tough questions and contrast candidates' visions and policies for the future of America, CNBC's moderators engaged in a series of 'gotcha' questions, petty and mean-spirited in tone, and designed to embarrass our candidates.

Pretty straightforward, right? Perhaps he'll be happier with the treatment the Republican candidates will get from CNN in February. Details about the debate, including the moderators and venue, are yet to be announced.