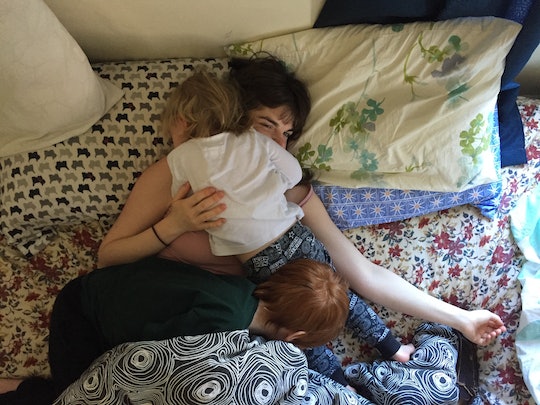 Co-Sleeping Can Make Moms Depressed, & No It's Not To Do With A Lack Of Sleep

To co-sleep or not to co-sleep; that is the question. Some parents love it, some parents hate it, some parents do it because it’s literally the only way to get their infant to sleep for two hours in a row (I’m looking at you, baby Mabel.) Most co-sleepers say they bed-share because they feel it’s best for the child, but are there any negative consequences for parents? According to a new study from researchers at Penn State, the answer is overwhelmingly yes: co-sleeping can make moms depressed.

In fact, moms who co-slept past six months with their babies — meaning they had their baby in their room on a separate sleep surface, or were bed-sharing — reported feeling 76 percent more depressed than moms whose babies slept solo in another room. But the main reason for these low spirits seems to have less to do with the actual co-sleeping and more to do with feeling judged by other people about co-sleeping.

After studying the nighttime habits of 103 moms with new babies, researchers found that moms who co-slept past six months reported getting more social criticism about their sleep choices than other moms, which contributed significantly to their higher levels of depression.

For this long-time co-sleeping and bed-sharing mom, that statistic is both shocking and also totally no surprise. For every cool, supportive comment about our family bed set-up, I got five negative, eye-rolling, fear-mongering reactions: “You must hate sleeping,” “Your baby will never sleep on his own,” “Oh my god, just let your baby cry! Don’t be a martyr!” and so on. And yeah, it made me super depressed sometimes. I lived in fear of “doing the wrong thing” as a parent, and all that criticism fed right into that fear.

I remember hauling the Pack ‘n’ Play and setting it up to give the illusion that we used it just so I wouldn't be judged for co-sleeping.

And I’m not the only co-sleeper who felt this way. “My mother-in-law would make repeated comments about how 'babies need to sleep in cribs.' My father-in-law asked me if I was going to suffocate the baby,” Lisa, a mother-of-two from Wisconsin who bed-shares, tells me. “I remember hauling the Pack ‘n’ Play and setting it up to give the illusion that we used it just so I wouldn't be judged for co-sleeping. It made me feel like shit and a like a terrible mother.”

The American Academy of Pediatrics recommends that infants share a room with their parents for the first six months of their life, if not longer, to lower the risk of SIDS. The Safe Sleep Guidelines stipulate that infants should be on a separate sleep surface clear of any other objects, and that bed-sharing raises the risk of SIDS. However, a 2016 update to the recommendations addressed the reality that many parents do choose to bed-share, despite the risks, and added the advisory that mothers who feed during the night should nurse in bed rather than an armchair or couch, so that if they do fall asleep, the baby is in a safer space, and that ideally the mother will return the baby to a crib or bassinet after feeding.

If the behavior is so widespread, why are so many people judgmental about co-sleeping? Turns out, it’s just a cultural thing.

“Our culture is not a co-sleeping culture,” Douglas Teti, department head and professor of human development and human studies at Penn State tells Romper. “And when you’re bucking that trend, you tend to get comments from people — whether it be your mother, your mother-in-law, your spouse — that that is not what’s good for the baby.”

But, adds Teti, “There’s really no evidence that [co-sleeping is] good or bad for the baby, in fact half the world co-sleeps beyond six months and the children seem none the worse for wear.”

Co-sleeping is really hard on moms, especially when it comes to losing sleep — which can in itself lead to depressive feelings.

As any new parent can attest, the first few months (if not more) of caring for an infant are riddled with self-doubt, and how well your baby sleeps is a topic that can bring even the most confident mom to tears. And while co-sleeping is a choice for some moms, for others it’s simply the only way to get a baby to sleep at all. Surely, the levels of reported depression would be lower in the former category and higher in the latter?

“We expected proactive co-sleepers to have better mental health, but that didn’t seem to make any difference.” Teti tells me.

There are two ways to interpret this information. First, that co-sleeping is really hard on moms, especially when it comes to losing sleep — which can in itself lead to depressive feelings, according to researchers at Oxford University. Second, that feeling judged by other moms can seriously affect mental health, even if you’re 100 percent confident in what you are doing. And you know what might also make moms extra sensitive to the negative effects of social criticism? Lack of sleep! It’s a vicious circle of vulnerability.

But for a lot of co-sleeping moms, the “sleep” part of “co-sleeping” isn’t the focus. “Co-sleeping is awesome if you are nursing, and nursing is awesome,” says Laurie*, mother of two from Massachusetts who also bed-shares. “Yes, sleep deprivation causes depression. [But] human connection is not pathology, and I am tired of people trying to pathologize my children’s natural, innate, human-mammalian desire to connect with me and to them.”

Ultimately, Teti says, the study shouldn’t dissuade parents from choosing a sleep system that works from them, but simply informs would-be co-sleepers of what to expect: “[Co-sleeping is] going to be associated with greater sleep disruption on the part of the parent, and you want to just make sure that you’re good with that, number one.” He continues, “…[if] you’re more prone to responding more negatively to criticism, and if that’s going to impact your emotional well-being…”, that’s something else to take into consideration.

While the struggle to get a baby to sleep is something no parent can avoid completely, picking a sleeping system that works for all family members should be the highest priority. The harder task? Not letting other mom’s judgmental opinions get in our heads. If we could only solve that little problem, we’d all probably sleep a little better at night.

*Not her real name.

More Like This
I’m A Newly Single Mom. How Do I Get Over My Body Insecurity?
9 Bedtime Mistakes That Are Keeping Your Baby Awake & How To Fix Them
24 Amazing Harry Potter Costumes For Fans Of All Ages
12 Helpful Tips For Hiking With Kids