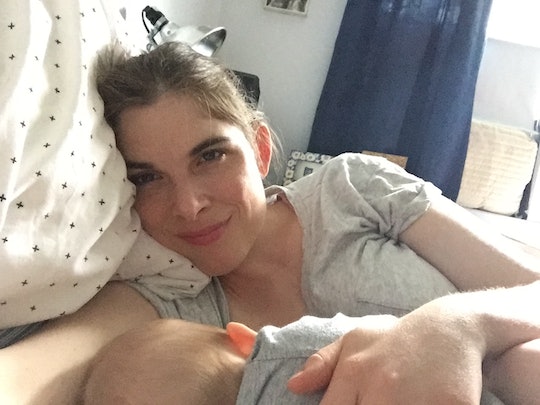 Co-Sleeping Is Killing My Body, But I Love It

My lower back burns. My shoulders are rocks. My spine is a rod of pain. My hips feel “tight,” but “tight” doesn’t even begin to describe how they actually feel — “twisted rods of pain” is more accurate. If a normal person woke up feeling this way, they would check themselves into urgent care. But being in total physical pain is my normal, everyday status. Why? Because I co-sleep with my toddler and this is simply how my body feels now.

When Mabel was born in October last year, she spent two days sleeping in a plastic hospital bassinet. On day three, she came home and immediately moved to safely co-sleeping with us in our king-sized bed, because she totally refused to sleep anywhere else but attached to my body (the American Academy of Pediatrics' recommendation against infant bed-sharing be damned). 425 days later and counting, she’s still here, waking up between 3-6 times a night to nurse.

You’d think there would be enough room for everyone to sleep comfortably, but you’d be wrong! To accommodate Mabel, I sleep on my side, my bottom arm outstretched or bent at the elbow with all of my weight on my delicate shoulder bones. Whenever she wakes up, I curl around my daughter and arch my back — just enough to likely cause permanent damage — to get a nipple into her mouth. She nurses somewhere between 15 seconds and 15 minutes, and we both fall back to sleep in the same position.

You might be asking: is this a safe and comfortable way to sleep, Phaea? No. No, it is not. But due to total and utter exhaustion, I rarely rally enough focus in the middle of the night to move my big, dumb body into a less painful position. When Mabel greets me in the morning with a cheerful “Mama," I don’t so much wake up as unfold with a creaking sound, accompanied by cascades of stabbing pain down my spine.

Who would be crazy enough to sleep this way for 15 months, you ask? Shhhh, I say.

Who would be crazy enough to sleep this way for 15 months, you ask? Shhhh, I say. It hasn’t only been 15 months: I slept exactly the same way with my son for the first 18 months of his life and 12 more months after he’d been night-weaned just for fun! Then Mabel was born and the process started over again.

It’s no surprise that four years and three months of sleeping on my shoulder with a hunched spine has made my body feel like s**t. I asked New York City-based physical therapist, Jessica Benardello, PT, DPT, to explain it to me: "Ideally, when you are laying in bed, you want your spine to be in a neutral position with no space between you and your pillow/mattress. There should be no twisting or side bending.” Whoops!

“When your spine is out of its neutral alignment,” Benardello told Romper, “especially repeatedly over time, changes can happen within your body. Some muscles may shorten while others lengthen and then they become inefficient at doing their jobs. Nerves can be compressed as the exit the spine or as they travel down your extremities which can cause pain, numbness, or loss of motor control.”

So I still have numbness and loss of motor control to look forward to! That’s cool.

But despite it all, I absolutely refuse to give up co-sleeping. I think the positives far outweigh the negatives, spine be damned. First and foremost, research by attachment parenting guru Dr. William Sears has shown that co-sleeping is great for kids, leading to more confidence and happiness. That’s pretty important. But, co-sleeping has also been great for me. Neither of my kids slept for more than an hour at a time, even in a fancy-shmancy Arm’s Reach bassinet. If I hadn’t finally just brought them to bed with me, I’m 100% certain I’d have spent the last four years and three months wide awake.

But co-sleeping isn’t just about means to an end. Co-sleeping is bonding time. As a working mom, I spend 10 hours a day away from my girl. She still cries when I leave every morning. Often, so do I. Instead of nursing her, I sit in a little room and pump milk with one hand while typing with the other. The minute I get home, we cling together like monkeys. But the evening routine is exhausting, with rejected dinners, meltdowns over bath towel animals, and story time negotiations. When I finally find myself nursing her to sleep, I’m both relieved and disappointed. Another day is gone, and it seems like I missed all the good stuff.

But then I get to fall asleep curled around her like a giant question mark, kissing her forehead and holding her tiny hand. If you don’t know, that is a description of bliss. My happiest moment of the day. You could say the reason I wake up in the morning is to cuddle with my daughter at night.

So yeah – I won’t be giving up co-sleeping anytime soon. Here’s what I will do. I will make an appointment with a physical therapist (as Jessica gently suggested). I will fight off sleep and move my body into a less painful position in the middle of the night. I will stretch in the mornings and book myself some massages. I will attempt to care for my body as lovingly as I care for my daughter.

Or maybe I’ll just kick my husband out of bed. Honestly, we could use the space.