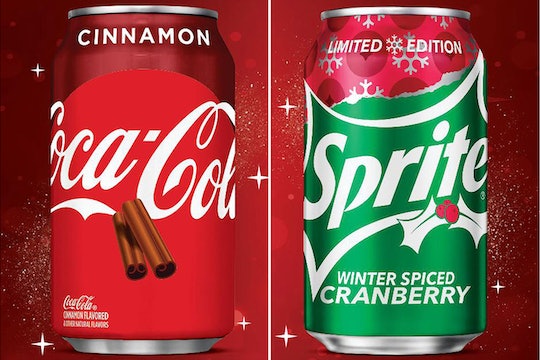 I am a giddy lover of holiday spiced beverages. Mulled wine, spiced cider, rich eggnog, and cheerful pumpkin spiced lattes can be found in my home from the first kiss of autumn through the holidays. A new seasonal latte or soda flavor makes me downright ecstatic, so when I heard that there were new Coca-Cola Cinnamon and Sprite Spiced Cranberry soda flavors soon to arrive, I started schvitzing.

Coca-Cola Cinnamon has been available previously in the UK, but has never been seen in the United States until this year. Both the new Coca-Cola Cinnamon and Sprite Spiced Cranberry will be hitting the shelves on Sept. 30 and will stay until the end of the year, or until the product runs out, according to a statement from Coca-Cola emailed to Food and Wine.

Curious about the flavor, I found a press release in the UK describing the zero calorie version from their launch, which noted that "the new addition to the Coca-Cola family is bursting full of warming flavours and is guaranteed to get you into the festive spirit as we head into the Christmas season."

The wildly popular Instagram account CandyHunting was the first to break the news on this new launch. They wrote glowingly about the potential of the new flavor, saying that the combination of sugar and warm spices is likely going to be delicious. As for Sprite Spiced Cranberry — I guess we will have to wait to try them ourselves.

Personally, I think that both beverages offer a unique chance for holiday themed cocktails perfect for your end-of-year parties. I'm picturing a huge holiday punch made with Fireball Cinnamon Whisky, Coca-Cola Cinnamon, and a splash of McAfee's Brown Sugar Liqueur. If you're feeling really frisky, you could float a few scoops of vanilla ice cream on top, allowing it to get really creamy and foamy.

The Sprite Spiced Cranberry calls more for a cocktail than a punch. One way you could use it would be to pair it with a really dry gin like Monkey 47, and add a tiny splash of fresh cranberry juice on top. The dry gin would offer a better balance to the sweet soda and tart juice than a super fruity variety, and the flavors would not overpower each other.

If you're pregnant and need a mocktail, I would go with a splash of cranberry juice, a little soda water to cut the sweetness, and a healthy twist of lime. And by all means, serve it with crushed ice — the perfect ice for chomping when pregnant.

There is a lot of commotion on social media about this release, and honestly, it's pretty mixed. Many people on Twitter are tweeting the iconic meme of Jeff Goldblum in Jurassic Park where he said, "Your scientists are so preoccupied with whether or not they could, that they didn't stop to question if they should." To some, this feels very "New Coke" or "Pepsi Clear," but I think it shows promise. I will admit that the cinnamon-flavored Pepsi Fire was a "no" from me. But despite what many say, Pepsi and Coke are very different beasts, and the flavors of Coca-Cola Classic may blend more evenly with cinnamon than it did with Pepsi.

The Sprite is an easy win. I'm already a big fan of regular cranberry Sprite, a holiday flavor that returns annually, so adding a spicy component to that seems like a more natural evolution than cinnamon Coke. I will be even happier if they release a diet version of the same flavor, because I am one of those people who has been drinking diet soda for so long that the regular sodas taste weird to my chemical-loving tastebuds.

We don't have to wait for long to know what the new Coca-Cola Cinnamon and Spiced Cranberry Sprite will taste like, and I for one cannot wait.