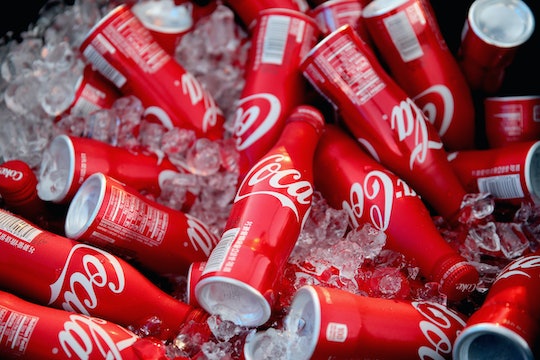 Coca-Cola Will Offer Paid Leave For All New Parents, Because It's 2016

Coca Cola wanted to figure out how to recruit and retain the best millennial employees, so it gathered a focus group of employees and listened to what they wanted: paid leave for all employees. Yes, millennials convinced Coca-Cola to offer paid leave for both men and women, and it's a huge step toward gender equality in the workplace that women have needed for decades and that more and more companies are beginning to understand. The new paid-leave-for-all-new-parents benefit will kick in on Jan. 1 2017.

Why is it important for all parents, regardless of gender, to have the opportunity to stay home to take care of new additions to the family? Dads who take parental leave boost equality both in the workplace, because women aren't seen as the sole parent tasked with child rearing, which cuts into their work productivity and advancement. In addition, a father helping out at home balances the load a woman takes on, giving her more time and opportunities at work. It's a beautiful win-win for Coke employees that will hopefully help lead the rest of the workforce to universal paid leave, putting the U.S. on par with the rest of the developed world.

Here's a look at the work of the "Coca-Cola Millennial Voices" in action.

But it makes sense. Today, 40 percent of households with kids under 18 have a woman as the primary breadwinner. And, as of 2013, about 70 percent of mothers were in the workforce. To millennials, both men and women, old ideas about gender stereotypes are necessarily giving way to the reality that mom going to work isn't some Mr. Mom hijinks — it's reality, and modern families and modern workplaces are gonna have to adjust.

Just this weekend I was at Target and I saw a dad with his little girl who was about 4 years old walking nearby to their car. When the little girl told her dad she had to go potty, he swung into action like a member of an elite special-ops group. He whipped a potty out of the back of the car, lined it with a Target bag, sat her down, and opened the car door to provide a privacy shield for his little girl. When she was done, he pulled up the bag, tied it and threw it in the trash. It was like a beautifully choreographed ballet. Totally not the way I would have handled it, but it was perfection. That's what I mean. People approach child rearing challenges in a whole different way, and it's fantastic for children to have those experiences with their parents.

Giving both parents paid leave, and the time to do their own parenting thing, is a good thing for their tired, often-working partners and for their kids. Engaged dads live longer, according to a recent study. Because, let's face it, taking care of kids is hard, but it's also a blast. And after taking care of kiddos, you're happy to get back to work.

The millennials finally standing up and working to change the system are doing every family a service, not just their own. And if the reaction from Coca-Cola's Chief People Officer Ceree Eberly is any indication about how employer attitudes about balancing work and family, things are definitely headed in the right direction. “We think the most successful way to structure benefits to help working families is to make them gender-neutral and encourage both moms and dads to play an active role in their family lives," Eberly said.

With global businesses like Coca Cola, Google, and Netflix setting an example of how companies can adjust benefit packages to accommodate paid leave for all employees, the rest of the U.S. economy is sure to follow, eventually. Even Democratic presidential candidates former Secretary of State Hillary Clinton and Vermont Sen. Bernie Sanders are both on record calling for federally mandated paid leave.

But it's employees like Coca-Cola's group of "Millennial Voices" that are doing the tough work on the ground, leading the country toward a more sane and productive path for modern American workers and their families.

More Like This
Dads Share What Paid Family Leave Would Mean To Them In Heartwarming Video
The FDA Is Warning Parents To Not Use Baby Neck Floats After One Infant Died
'Clueless' Is, Like, Totally Still A Good Teen Movie In 2022
6 Takeaways From The White House’s First-Ever Parents Press Conference