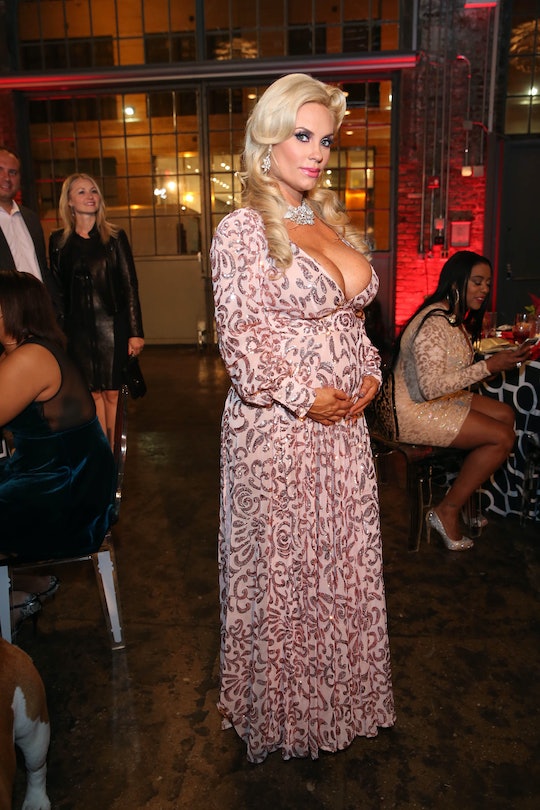 Coco Austin Defends Her Small Bump To Internet Haters Yet Again, But Honestly, Why Should She Have To?

Another day, another ridiculous comment about a pregnant celeb’s baby bump. Reality star (and first-time-mom-to-be) Coco Austin’s 34-week pregnant belly is tiny, and it seems that everyone has something to say about it. Having been on the receiving end of claims that she has been dieting during pregnancy to stay slim, or even that she’s been faking her pregnancy entirely and using a secret surrogate, Austin has taken to her E! News blog to hit back at haters who have said her small bump isn’t natural.

Sharing that she feels like she “kind of got gypped” because she didn’t end up with the big pregnancy belly she thought she was going to have, Austin says that she didn’t see much of a bump until eight months along, even though most women pop much earlier. And, like most pregnant women, Austin says she actually was really looking forward to looking and feeling pregnant, because she is loving pregnancy and is super proud of her body.

So what’s the reason behind her smaller pregnancy belly? According to Austin (and her doc!), it all comes down to her fitness level and strong muscles:

“...athletes look like this all the time because they have such strong ab muscles that it takes longer for a bump to pop out. My doctors said they just delivered a figure skater's baby and she was smaller than me and she squeezed that baby out in nearly three tries because her abs were so strong.”

For any woman who’s had a long, grueling delivery, the idea of being done in just a few pushes thanks to strong ab muscles sounds pretty enviable — and, of course, it makes a lot of sense. So why is it so hard for people to believe that Austin’s bump can’t be healthy, or even real? And why do some many people feel like they have the right to comment on it?

As far as Austin is concerned, the only opinion she considers worth listening to is that of her doctor’s (a.k.a, the actual medical expert). But she knows that, for some reason, she’s always been a target for criticism and negative comments as a result of being in the spotlight, even though she has absolutely nothing to apologize for:

“I'm trying to always prove a point to those people who are doubting me. I'm not going to try and prove a point anymore. You're going to believe what you want. My whole life I've faced rumors like ‘You can't have that butt, it must be implants' or ‘your waist is so small, you must have had a rib taken out.' Everything that I do is unbelievable.”

It is totally unfair that she — or any pregnant woman, for that matter — is made to feel like she has to defend herself over how her body is naturally responding to pregnancy. But she is absolutely right: She doesn’t have to answer to anyone. And what better role model could her soon-to-be-born daughter ask for than a mom who knows that she's completely entitled to love the way she looks?