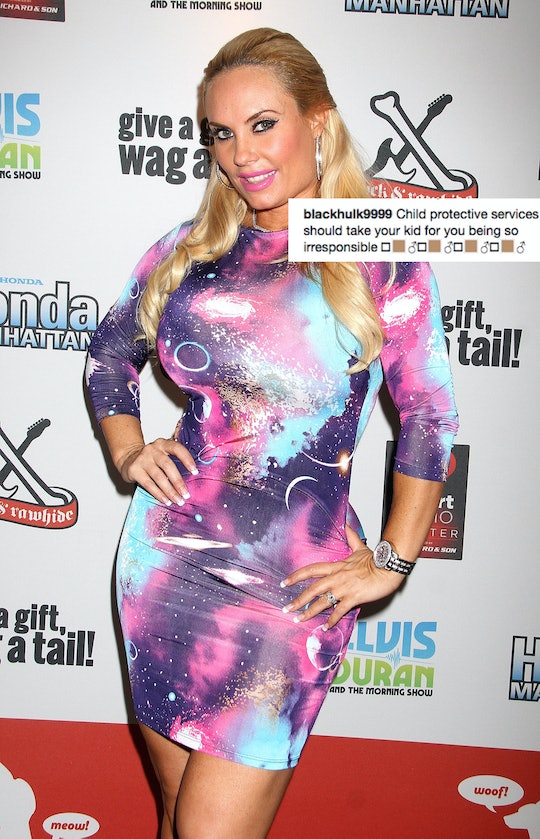 Coco Austin Took Her Daughter Swimming With Sharks, & Some Parents Are Outraged

If you're not familiar with Coco Austin, she's a model and actress who also happens to be married to Law & Order: SVU star, Ice-T. But if Austin was to describe herself to a stranger, she'd probably open up with the fact that she's a mom to her 2-year-old daughter, Chanel. Austin, to put it mildly, loves being a parent and she regularly posts updates about Chanel to Instagram. Unfortunately, Austin is often bashed for her parenting choices, whether it be for the clothes she wears (yep, moms can't show any skin ever) or for how she chooses to pamper Chanel. And on Wednesday, the mom-shaming reached a fever pitch after fans caught wind that Coco Austin took her daughter swimming with sharks. Spoiler alert: Austin's haters smell blood in the water and they're not holding back any punches when it comes to her parenting.

Ever since Chanel was born in November 2015, fans have come after Austin's ability to parent. Mainly, people are annoyed that Austin is mom who happens to wear revealing clothing and is confident in her own skin. Although it's clear that Austin doesn't care about the negativity (take a peek at her Instagram for evidence), one would imagine that the comments about her daughter grates on her nerves. Earlier this month, Austin was accused of attracting "pedophiles" to Chanel because of a bikini she dressed her in, according to Life & Style, and in January, she was attacked for "slut training" her kid, according to Cafe Mom. And when you consider all the hate Austin receives on a regular basis, it's no surprise people are furious that she took Chanel swimming with sharks while on vacation in the Bahamas.

"This seriously was crazy having all these sharks in the water at once," Austin captioned a video of herself holding Chanel in shark-infested waters, according to Instagram, "...but I have to say, half the battle was holding Chanel while swimming...lol."

As you can see in the video, Austin didn't take Chanel to hang out with great whites, nor did she introduce her kid to shark cage-diving. Austin, like many tourists before her, swam in a designated area with nurse sharks. Based on Austin's location tag, it looks like she swam with sharks at the popular tourist destination, Compass Cay. A quick Google search shows that Compass Cay is frequented by vacationers to the Bahamas, and one travel article I found included a picture of a golden retriever swimming alongside one of the nurse sharks. In short, this tourist spot appears to be a family destination.

Still, people aren't pleased that Austin decided to embark on this travel adventure with Chanel in tow.

"Child protective services should take your kid for you being so irresponsible," one person wrote.

"Would of never risked it. Not with sharks, not with my baby," a fan chimed in. "Not a good choice."

"This is stupid never would do this with a baby," another critic added.

"Whos calling CPS?" someone else asked.

Luckily for Austin, however, her supporters were ready to serve up some facts about nurse sharks.

Someone else assured Austin: "You were perfectly safe these are nurse sharks they are harmless."

I knew the second is a this video the uninformed would be all over you! Basking sharks don't bite. Ever. That baby was PERFECTLY safe the whole time! Coco, that was an amazing experience to give your little lady. You're one hell of a mama!!

As it turns out, nurse sharks are relatively harmless to humans, according to National Geographic, and they enjoy snacking on small sea creatures. In terms of Compass Cay specifically, the sharks there are seen as "couch potatoes" and they tend to rest a lot, according to Apple Specials, a travel website.

Of course, any activity with an animal poses some risk. Whether you're at the dog park or visiting an animal's habitat, there's always the potential that something could go wrong. In the case of nurse sharks, for instance, they might bite (yes, they do have teeth) if you bump into them too roughly or if you go out of your way to agitate them. In short, it's probably a stretch to say that Austin put Chanel in serious danger here (and if she did, why would she broadcast it to millions of people?). If anything, the nurse sharks should be the topic of concern — having tourists invade your home on the regular must get tiring.

Mini-lesson about nurse sharks aside, one has to wonder why Austin faces so much backlash as a parent. If I had to guess, it's because she doesn't fit the mold of a glossy and seemingly perfect celebrity mom. One can only hope that Austin's haters will eventually start to see her as the loving mom she is, because the strong bond she has with her child deserves to be respected.