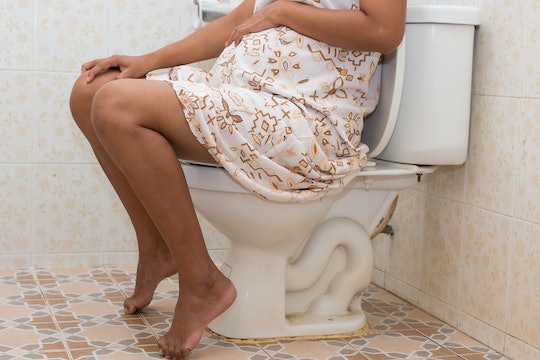 I am a coconut oil devotee, and I use it for absolutely everything. I cook with it, I clean with it, it's my favorite moisturizer, hair detangler, curl cream, and lip balm. It's amazing on toast, and perfect in a white cake. I've also heard about it being used more medicinally, for both brain and body general health. One of the most common reasons I've seen for ingesting coconut oil is for constipation. It sounds too good to be true. Knowing how troubled pregnant tummies can be, does using coconut oil for pregnancy constipation actually work? Because it seems like the perfect natural solution.

There isn't a lot of scientific data available to support the idea that ingesting coconut oil is a good, effective method to relieve constipation at any time, including during pregnancy. In fact, many of the health claims about coconut oil have been largely debunked, reported The Guardian. Most of the articles that claim that it works wonders for constipation point to its ability to lubricate the digestive tract and move the food through the gut more efficiently. If that's supposedly how it works, it stands to reason that any oil would be effective, and it's just that coconut oil is ridiculously popular right now.

According to Nutrition in Pregnancy, the digestive system goes through a real upheaval during pregnancy. While you might've had a regular bathroom routine that was a constant as the sun before you were pregnant, all that could change with the first influx of hormones. The hormones slow the natural downward movements that occur to work through your large and small intestine, turning the normally uncrowded freeway of your digestive tract into the George Washington Bridge out of New York City at 5 p.m.

Also, as you progress with your pregnancy, the ever-growing baby in your belly is causing your intestines and stomach to get shoved into the tiniest of available spaces, according to What to Expect. This causes things to slow down dramatically. Have you ever played with a garden hose in the summer? If you bend the hose, the water coming out of the hose slows down, and the pressure is lessened. If you bend it completely in half, you can almost stop the water from being released entirely, but some still manages to escape. That's essentially what's happening to your intestines. Your baby is pinching it off with its growing body and major in-utero movements.

The idea is that coconut oil can lube up your food's trip through your digestive tract and slip by the guards to make its way down and out. But does it work? Is coconut oil good for pregnancy constipation?

Popular website Livestrong advised that people looking to use it as a laxative combine 1/2 tsp of coconut oil in liquids, and drink that four times per day for maximum benefit. That seemed like a lot to me, so I reached out to Abbey Sharp, dietitian and blogger at Abbey’s Kitchen. She tells Romper that it might be OK. "Adding coconut oil to meals may help lubricate the stools and is considered safe to eat during pregnancy, but it’s important that you don’t go too crazy." She suggests starting with a small amount at mealtime — "just a teaspoon, and monitor your bowels as adding too much too fast may cause severe cramping and diarrhea." No one has time for that nonsense. It's at least something to try.

So while it might not be the magic bullet for constipation you're looking for, it does make food tasty. Sharp also adds that there are tons of healthy and safe remedies for constipation that we know work. "You’ll also want to try other remedies like adding high fiber foods like vegetables, whole grains, pears, and raspberries, increasing your water, prunes and increasing your pregnancy approved activities like walking," she says.

If all else fails, Sharp advises talking to your provider. Not only is constipation uncomfortable, but if left untreated, it can become a cause for concern. If you already bought the gallon jug of coconut oil, don't worry — there are a million uses other than just as a laxative.