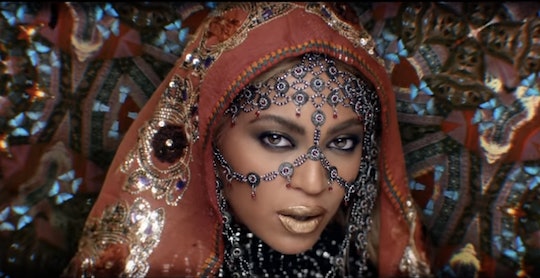 Coldplay dropped its newest music video for the song "Hymn for the Weekend" on Friday (well-timed, considering the song name), featuring Beyoncé. Usually, the appearance of the "Who Run The World" singer in a song or video means it is automatically touched by gold, but not this time. While the "Hymn for the Weekend" music video is undeniably well-shot and beautiful, some question whether Coldplay and Beyoncé were appropriating Indian culture in it.

One of the main points that critics have used actually relates to the pop princess herself. In the music video, Beyoncé is dressed as a gorgeous Bollywood star, bedecked in beautiful Indian clothing and wearing henna. Coldplay's front man Chris Martin runs through the streets with Indian kids, plays some music during the spring festival Holi, and Beyoncé shimmies around as the Bollywood star in a movie theater. While there's some beautiful shots of India, a few questions keep cropping up. Why not use an actual Bollywood actress to play a Bollywood actress? Actually, why not use an Indian singer to take on Beyoncé's part? Why represent India using the same played-out stereotypes Hollywood has been prone to for years? Alternatively, people pointed out, what's wrong with paying homage to a beautiful country and culture?

I could go on. There was a lot on Twitter and everyone seemed to have a strong opinion one way or another.

Now, not to become the internet's enemy here, but I don't think there's anything potentially wrong with Beyoncé wearing Indian clothes. The problem is that the entire video shows a stereotyped, big-box-packaged view of India. But there's so much more to the country, and the India depicted in Coldplay's song is just one tired facet that the world is already very familiar with (the same way the band's "Princess in China" video was weird and shouldn't be used as a cultural representation). It might be appropriation, but in my opinion, it's likely ignorant appreciation. What's the harm of a bit of ignorant appreciation, one might ask? At least it's showing something of a country, right?

The problem with ignorant appreciation is that it reduces a country to just a few easy tropes. When people learn that I was born and raised in the Dominican Republic, 80 percent of the time their reaction is, "Oh, but you don't seem Dominican." The image many foreigners have of the Dominican Republic is one of people dancing merengue in the streets, drinking rum on the beach, being a beautiful brown color, and of poor kids playing baseball with visiting foreigners.

Yes, merengue, gorgeous beaches, and an appreciation for rum may be a part of Dominican's culture, but it is only a small sliver. Coldplay used a similar sliver of India to create a gorgeous backdrop for a music video, but that backdrop shouldn't be considered an accurate representation of India.

I don't think Coldplay or Beyoncé meant any harm by the video, and a lot of tweets from Indians seem to actually celebrate the "Hymn for the Weekend" video. My favorite Tweet in this whole debate, however, is the following:

Because if you're going to fly all the way over there, use the country for a music video, and leave again, the least you could do is actually schedule a concert for fans in India.