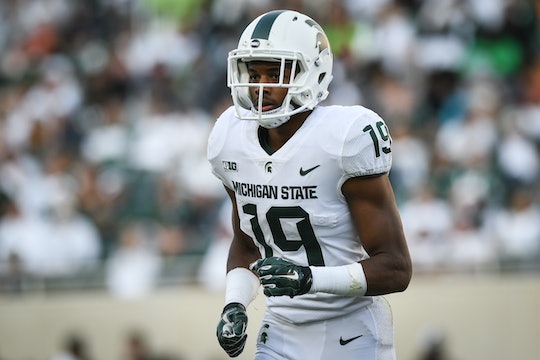 After Losing His Parents, College Athlete Commemorated Final Game With His Beloved Dogs

After tragically losing both of his parents in recent years, Josh Butler, a cornerback for Michigan State University, made sure to celebrate the end of an important chapter of his life with two loyal companions who helped him cope through such incredible loss. Over the weekend, the college football star brought his dogs to senior night and the touching, bittersweet moment has moved countless people across the country.

On Saturday, Nov. 30, Butler walked out to a roaring crowd flanked by his two boxer-pit bull mixes, Roxy and Remi, for his final home game. Both of Butler's parents died during his time in college. According to CNN, Steven Butler died in November 2017, mere hours before Josh was supposed to play in a matchup between Michigan State and Penn State. His mom Ladrida Bagley died in April 2019 after she was diagnosed with stage 4 breast cancer, according to the Lansing State Journal.

Butler ended up adopting the sister dogs in between his parents' deaths as a way of coping with his father's loss. "We talk about the sadness and the negativity about a lot of things because that's what they remember the most, but there's also positivity behind any story," Butler told the Lansing State Journal. "There's always a rise after the fall."

A photo of Butler with Roxy and Remi has since been shared by MLive's Facebook page, and it's already attracted more than 66,000 likes and over 33,000 shares. Similarly, a video of the touching moment tweeted by CNN's Michigan State beat writer, David Harns, has been viewed over 5 million times.

Butler himself has also reflected on his journey via social media. "Definitely been a blessed journey since taking the greyhound bus as a kid all the way up to Michigan State, being able to prevail through losing my father in 2017, and seeing my mother pass away in my arms just this year in April from cancer," he wrote Sunday on Instagram, adding that his "next big step" will be earning his master's degree in December "My Dogs mean the world to me! GO GREEN! ... May my angels keep watching over me above."

The social media response has been strong and swift. One Facebook user declared, "My new favorite football player. Nike, Adidas etc should sponsor athletes like this — here’s a young man who dealt with losing his parents, found love in two wonderful dogs, graduating from a fantastic school and is a great athlete. This is the BEST of the next generation."

Another Facebook user commented, "How hard that must have been for him. The stresses of college coupled with the loss of the two most important people to you at that age. Good luck in your future endeavors Mr. Butler."

Yet another person wrote on Facebook, "Look at his face, love that he can feel emotion, especially happiness after such a tragic loss."

Another Facebook user chimed in with, "This touched my heart. Certain his parents are smiling down on him. Wishing you all the best."

Football fan or not, you have to agree: Josh Butler walking onto the field with his beloved dogs standing in for the parents he lost is beyond powerful.