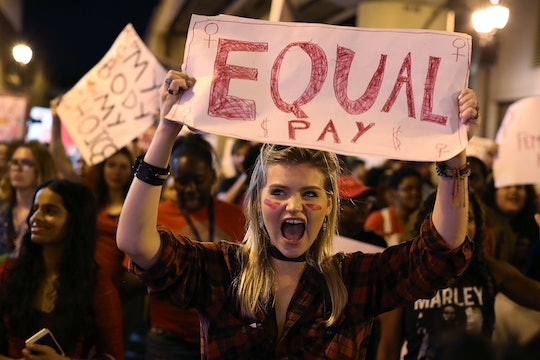 No, Women Aren't Paid Less Because Of Genetics

On Tuesday, during a board meeting for the State University System of Florida, one college official suggested women don't get equal pay because of their genetics and proposed incorporating skill negotiation into school curriculums. Edward Morton, the board member who made the suggestion, later apologized for the comment, saying it was poorly worded. Regardless, the incident proves exactly why we need to raise the next generation with awareness around these issues.

According to Politico, Morton told the board on Tuesday:

Something that we’re doing in Naples [with] some of our high school students, we’re actually talking about incorporating negotiating and negotiating skill into curriculum so that the women are given — maybe some of it is genetic, I don’t know, I’m not smart enough to know the difference — but I do know that negotiating skills can be something that can be honed, and they can improve.

Morton was right, in a way. Women are less likely than men to negotiate for higher wages. But by no means is it because women have a nice gene switched on while men are genetically inclined to be savvy negotiators. In fact, research shows that women's lack of success when it comes to negotiation is mostly due to society's reactions to their negotiations, rather than women's intrinsic ability to effectively advocate for themselves.

As Harvard researcher Hannah Riley Bowles found in a 2007 study, women are socially penalized by both male and female interviewers when they initiate negotiations. "Women get a nervous feeling about negotiating for higher pay because they are intuiting — correctly — that self-advocating for higher pay would present a socially difficult situation for them — more so than for men," Bowles wrote for the Harvard Business Review in 2014.

Women receive that negative feedback because of the societal norms that we're all raised with. From babies' very first days, according to Slate, people assume smiling, happy babies are girls and that more ill-tempered babies are boys. Women in the workplace are rated as more likeable and competent when they act in more stereotypically "feminine" ways: wearing makeup, smiling, and nodding. According to the Women's National Law Center, expressing anger at work leads to increased stature at work for men, while women who do the same are penalized for losing control. We raise our kids to believe that women are nurturers who bring people together, who are gentle, who put others first, whereas men are painted as brash and confident.

Sure, men and women have slightly different levels of different hormones, but that doesn't account for the lifelong gender stereotyping that leads to, for instance, women being penalized for initializing negotiations. It's not that women are genetically just not that great at negotiating — it's that we've been raising generations of kids with outdated stereotypes.

According to The Washington Post, Morton thankfully apologized for his comments soon after the board meeting. "I chose my words poorly," he reportedly lamented in an email. "My belief is that women and men should be valued equally in the workplace."

In order to do that, we'll need to start changing the flawed idea that there's some evolutionary based gender difference that's led to how women are treated today. Instead, we should be working on ways to raise the next generation of boys and girls without passing on the stereotypes we hold today.