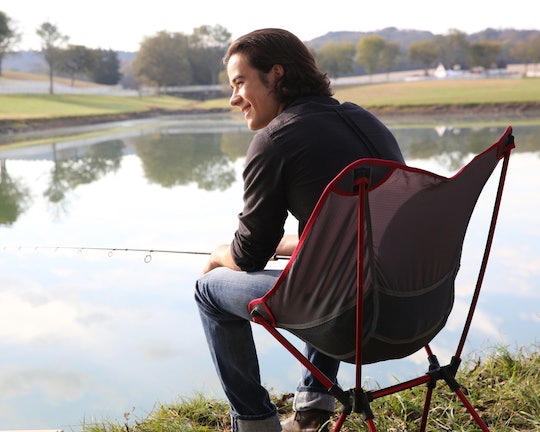 Colt & Maddie Break Up On 'Nashville,' But What Does That Mean For Him Next?

TV teen "it"-couple Colt Wheeler and Maddie Conrad enjoy a reunion on Wednesday's episode of Nashville, but unfortunately, the couple's joy is short-lived. While Colt has been enjoying the structure and discipline of being on his old school, no-nonsense grandfather's farm, Maddie has been maturing musically, and beginning to write from a more personal place with her songwriting partner Cash. Ultimately, it seems like the two are growing in different directions, which, eventually, leads to Colt and Maddie's break up on Nashville.

The trouble begins when Cash performs a song Maddie wrote which is not so subtly about her losing her virginity to Colt. He seems to find it too close for comfort, and lashes out by trashing musicians, the music industry, and the whole social media celebrity machine. He pompously tells Maddie and Cash that his grandfather fought in Vietnam, which is "real," while the music industry at large is all "fake." Later, in a would-be hookup session gone awry, he continues to berate Maddie, telling her that music "doesn't matter," rather, "helping people" is what really matters.

Way more patiently than the twerp deserves, Maddie explains that music helps people, too, and that it's her passion, her dream, and what she wants to dedicate her life to, even if Colt doesn't love it anymore, or harbors bad feelings toward the industry because of his damaged relationship with his country music star dad.

Cash steps in to give Maddie a quick pep talk about how girls mature faster than boys, pointing out that Maddie simply has her stuff figured out while Colt is still a little lost.

Meanwhile, the episode concludes with a shot of Colt staring longingly at a Go Army poster, and you can practically see the wheels turning in his mind. It looks like Colt is off to live what he perceives to be the same life of honor his grandfather led — a swift departure from the world his dad brought him up in. Fans on Twitter, for the most part, seem to be bidding him good riddance.

Certainly, this wouldn't be the first time a teen drama breakup led to some heartbroken boy joining the military on a whim (Degrassi, anyone?). But it seems like Colt needs the exact opposite of what the music industry offers to young people, so maybe Maddie will be better for him leaving, too.