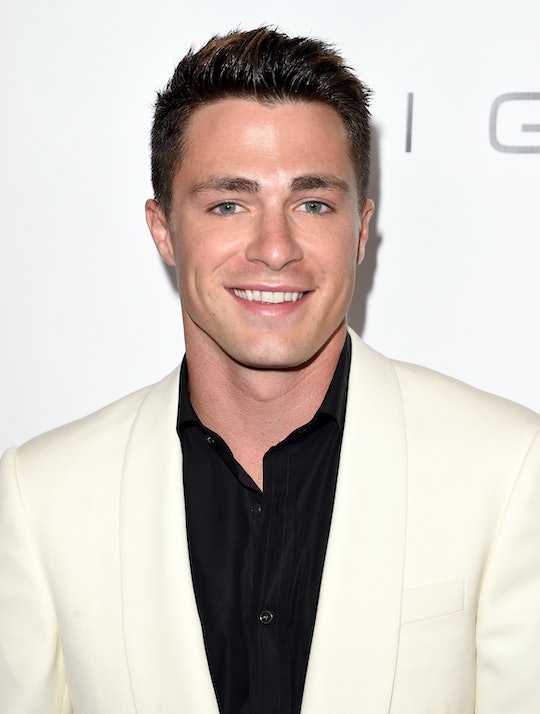 Congratulations are in order! Teen Wolf star Colton Haynes announced this week that he was engaged to boyfriend and celebrity florist Jeff Leatham. Haynes, who also starred in the CW hit Arrow, broke the happy news in a sweet Instagram post on Sunday.

"I SAID YES!!!" Haynes captioned a photo of himself and Leatham sharing a kiss, with a spray of fireworks in the background. In a second post, Haynes added that now-fiancé Leatham had commissioned a special message from singer Cher as well, to make the moment even more special. "Thank you Cher for the beautiful 'I got you babe' proposal lead in, you sounded incredible as always," he wrote. "The most special night of my life." Haynes fittingly decked out the posts with plenty of heart and diamond ring emojis.

As Us Weekly reported, Leatham had asked Cher, 70, to "record a video message that was projected on an enormous screen on the beach moments before he got down on bended knee."

"I got you babe!" the singer said, in the video message. "All right, this is for you. You know what it is, you know what you're supposed to do now. This is gonna be the best thing ever, and you have to call me to tell me how it worked out."

Leatham too had more than a few sweet words about the occasion. "Thank you Cher and @pauletteakapauly - for helping making my Proposal Evening Epic," he wrote in his own Instagram post, adding a row of heart emojis in the caption. "'I got you Babe' never sounded so good right before Colton Haynes said YES!!! So Appreciative and much love." (In a statement to Entertainment Tonight, Cher explained that she had "known Jeff forever," and that she was "excited for them.") In a follow-up Instagram Story, Leatham let followers in on the romantic details of the night, which included a rose petal-covered path and dozens of glowing candles, according to People.

One day earlier, Leatham shared a sweet Instagram photo of the couple on the beach at Las Ventanas al Paraiso in Cabo San Lucas, Mexico accompanied by the caption, "And the Sunshine on his Face - Pure Bliss." Haynes' own account featured several photos of the two, plus an addition solo photo of himself with the caption, "I can't put into words how truly happy I am right now. So full of love."

Haynes first confirmed his relationship with Leatham with an Instagram post back in February. "It's not every day that someone comes into your life & makes you want to be a better man," he wrote in the caption of a photo featuring the couple lounging in bed. "I feel so blessed to be by your side, @jeffleatham." Haynes tagged the post, "#WhatMoviesAreMadeOf."

Congratulations to the happy couple! If the moments they've shared with the public so far are any indication, it's going to be one amazing journey.