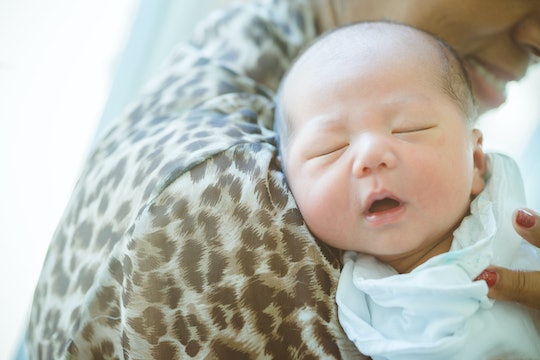 There's A Simple Way Parents Can Help Their Babies When They Feel Pain, Study Says

There's no denying that babies respond to the gentle touches of their parents. A hug or a nuzzle can go a long way towards comforting your little one, but it turns out that a particular form of touch, infant massage, can have almost medicinal powers. Comforting your baby in this way during medical procedures may provide pain relief, according to a recent study.

A team of researchers in the United Kingdom found that infant massage could reduce braining activity that is associated with painful experiences, according to Science Daily. The study, published in the journal Current Biology, found that gently stroking a baby at the speed of 3 cm per second could help relief pain prior to medical procedures.

Rebeccah Slater, professor of pediatric science at the University of Oxford and lead author of the study, told Science Daily that, "Parents intuitively stroke their babies at this optimal velocity," suggesting that this form of comforting comes naturally. Slater went on to explain that further research into the neurobiological aspects of infant massage could empower parents to comfort their babies in a more effective way. These findings build upon the existing pool of research into how parent-child contact, such as skin-to-skin or kangaroo care, benefits babies.

In order to determine how massage impacts newborn pain response, Slater and her team measured responses to medically necessary blood tests via behavior observation and electroencephalography (EEG) brain activity monitoring. Babies who received light stroking, or massage, had lower pain-related responses to the procedure. Slater explained that while brain activity was affected, physical response was not, as Medical Xpress reported.

"We hypothesized that stroking would reduce pain-related brain activity, so we were pleased to see it," Slater said, according to Medical XPress. "But we didn't see a reduction in how they reflex their limbs away from the heel lance. That could mean our intervention is perhaps causing a dissociation between limb movement and brain activity."

This isn't the first study to suggest that touch has an impact on infants. Skin-to-skin, also known as kangaroo care, has been shown to help newborns regulate their body temperature, boost immunity, encourage healthy heart rate and respiration, and promote healthy weight gain, according to Parents.

Additionally, cuddling "early and often" with babies has cognitive benefits as well. "Intentional supportive touch” has been found “absolutely crucial to babies’ developing brains,” Dr. Nathalie Maitre of Nationwide Children’s Hospital in Columbus, Ohio told Reuters. In a 2017 study, Maitre and her team of researchers linked cuddling with babies to "improved neurodevelopment, higher IQ, and lower rates of aggression," according to Babble.

And when babies are denied this crucial contact, they are worse off. As Dr. Nils Bergman, senior medical superintendent of Mowbray Maternity Hospital in Cape Town, South Africa, told Parents:

Physiology and research provide overwhelming evidence that kangaroo mother care is not only safe but superior to the use of technology such as incubators. Depriving babies of skin-to-skin makes alternative stress pathways in the brain, which can lead to ADD, colic, sleep disorders, among other things.

Slater and her team were well aware of these many benefits. She told Science Daily that her study added to past findings. "Previous work has shown that touch may increase parental bonding, decrease stress for both the parents and the baby, and reduce the length of hospital stay," Slater said of the findings. "Touch seems to have analgesic potential without the risk of side effects."

As if you needed another reason to neglect that ever-growing pile of laundry in favor of baby snuggles, their health depends on that bonding time. And next time that your little one has to have blood drawn or get necessary immunizations, consider infant massage as a means of pain management.