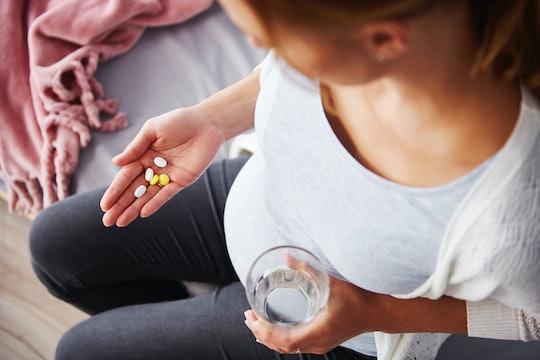 While pregnancy may come with plenty of aches and pains, the Food and Drug Administration (FDA) is cautioning pregnant people about reaching for just any pain reliever. According to the FDA, some common pain medication may cause pregnancy complications when taken at or after 20 weeks, including aspirin, ibuprofen, naproxen, diclofenac, and celecoxib.

"It is important that women understand the benefits and risks of the medications they may take over the course of their pregnancy," Patrizia Cavazzoni, M.D., acting director of FDA's Center for Drug Evaluation and Research, said in a statement released last week. "To this end, the agency is using its regulatory authority to inform women and their health care providers about the risks if NSAIDs are used after around 20 weeks of pregnancy and beyond."

According to the FDA, the use of nonsteroidal anti-inflammatory drugs, or NSAIDs, at or later than 20 weeks in pregnancy can cause rare but still serious kidney problems in the unborn baby. These kidney problems can then lead to low levels of amniotic fluid and other pregnancy complications.

The federal agency cautioned that because unborn babies' kidneys produce most of the amniotic fluid starting at or around 20 weeks of pregnancy, developing a kidney problem can result in lower than normal levels of this vital fluid. During pregnancy, amniotic fluid fills the womb and effectively surrounds the developing fetus. According to March of Dimes, it acts to cushion and protect both the unborn baby and the umbilical cord. Amniotic fluid also aids in the unborn baby's development of lungs, muscles, bones, and digestive system.

NSAIDS are one of the two major types of over-the-counter pain relievers available today. They include things like aspirin sold under the Bayer or Excedrin brand names, ibuprofen sold under the Advil and Motrin IB brands, and naproxen sold under the name Aleve, to name only a few. The FDA announced they were implementing a label change requirement for NSAIDs that would make the inclusion of a warning regarding the potential for pregnancy-related complications mandatory.

But pregnant people aren't without relief when it comes to body aches and pains. According to the FDA, medicines such as acetaminophen can safely be used to treat pain and fever during pregnancy.