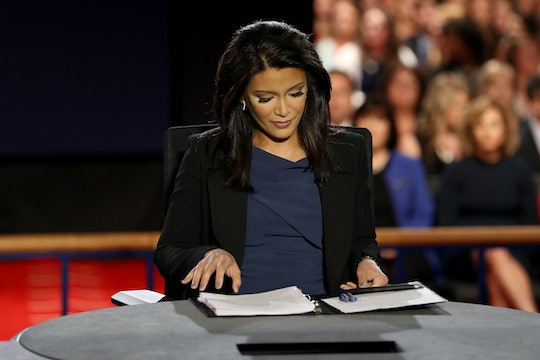 Tuesday night's vice presidential debate — the first and only debate between the candidates — covered a variety of issues, including Donald Trump's tax returns, former Secretary of State Hillary Clinton's trustworthiness, how either candidate would work with other countries to achieve foreign policy goals, and the economy and poverty. CBSN’s Elaine Quijano moderated the debate, but Indiana Gov. Mike Pence and Virginia Sen. Tim Kaine steamrolled over her a little bit. And they weren't the only ones who didn't treat her with the utmost respect. Comparing how Elaine Quijano and Lester Holt, moderator for the first presidential debate, were treated reveals so many different sexist double standards.

A few of the immediate differences in the way moderators are treated included how Kaine and Pence repeatedly talked over Quijano in a way that Clinton and Trump didn't do. At one point, Quijano actually had to cut off both of the candidates and remind them that when they yell over each other, viewers cannot hear what they are saying. It was a pretty badass moment. Second, Twitter users criticized Quijano's appearance, when there were few tweets about Holt's appearance.

And it's acceptable to criticize a veteran reporter's appearance during a nationally-televised political debate why? Oh, right, because she's a woman, and, you know, women are asking for those kinds of things when they, like, wear fake eyelashes.

Oh, yeah, and that's not even the worst thing that happened. Of course, any woman who holds her own in an intelligent conversation with men (especially when one of them is the running mate of known woman-hater Donald Trump) is e-vil. Like, witch-level EVIL. I mean, that's clearly the only reason she was cutting Pence off when he was speaking over his time, at least, according to this guy:

So, what does that make Lester Holt? A wizard who was asleep and too afraid to wield his power? Who knows, because no one called him a wizard or a witch for moderating his debate.

Unfortunately, Pence wasn't the only candidate who cut off Quijano when she was trying to do her job. At one point, when Kaine was talking about Trump's tax returns (yet again), Quijano tried to redirect him back to the question she had actually asked, which was about 9/11 and the Middle East. But Kaine wasn't having it, so he cut her off and said "This is important, Elaine." Yeah.

I don't know what he was thinking. Could he have more perfectly encapsulated mansplaining? And to a debate moderator. Come on.

Here's a joke he could learn from: "Hey, Kaine, what's a mansplainer's favorite kind of water?"

But he wasn't alone. Pence repeatedly interrupted Quijano and wouldn't answer her questions. She asked him three times about what he would say to a black senator who said he felt unfairly targeted by police officers and he continued to evade the question. Pence also wouldn't acknowledge Quijano when she told him he had run over his one-minute response time. Instead, Pence would just keep talking over her, refusing to move on to the next question. Neither of them showed her the respect an accomplished reporter and debate moderator deserves.

Viewers are generally hard on moderators while watching the debates. They expect them to crack down on the candidates when they aren't staying on subject, but then they get upset if the moderator is too involved. Walking that middle ground is difficult. Quijano stood her ground when she had to, but she couldn't always keep the candidates in check, and that's because the candidates were blatantly disrespecting her: a fact that was well-recognized on Twitter.

Still, some well-known Twitter users attributed Quijano moving from one question to the next and sometimes not being able to control the candidates to her incompetence rather than the candidates' mistreating her and refusing to follow the rules:

Sure, Holt was criticized for letting Trump yell over Clinton with ridiculous statements like "Wrong" and "False" while she was speaking, but few people went so far as to say he was just "reading through a list of questions." Quijano seemed to engage and correct and check the candidates much more often than Holt did. Is it a question of sexism, or was Quijano held to some weirdly higher standard because this is the only vice presidential debate and because it covered so many topics? That answer is unclear, but it's obvious that some of the criticism Quijano faced — like the comments about her eyelashes and the way the candidates cut her off and corrected her — seemed to be gendered and Holt didn't face similar standards.