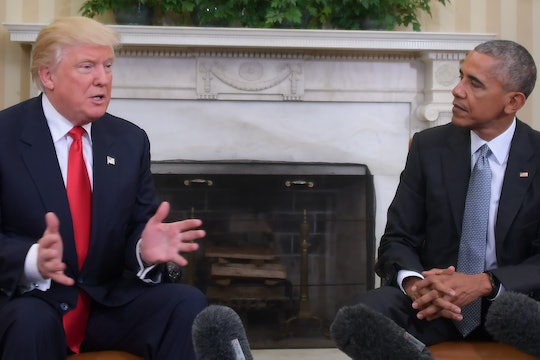 Good golly, are President Barack Obama and President-elect Donald Trump cut from different cloth. Obviously, their politics are different; as they're from opposite parties, that's to be expected. But they're really each other's opposite in so many ways, and nowhere is that more well-illustrated that when you compare Trump’s press conference speech with Obama’s farewell address. The two men addressed the public in two separate addresses just 14 hours apart, and they couldn't be more different.

The first thing that will strike listeners is that Obama is one of the greatest orators of our time, whereas Googling the phrase "Trump word salad" yields 518,000 results. Trump's a casual speaker, if I'm being gentle. He has his favorite words, he doesn't get too caught up in grammar or syntax, and, as his supporters are so fond of saying, he "tells it like it is," which could either be code for "says the offensive things I believe but am too afraid to say," or alternatively, "doesn't think before opening his mouth." But the overarching trend of Obama's farewell speech was one of gratitude to the American people for allowing him to govern these past eight years. Trump's press conference, meanwhile, was about how great Trump is.

Obama: "Whether we’ve seen eye-to-eye or rarely agreed at all, my conversations with you, the American people – in living rooms and schools; at farms and on factory floors; at diners and on distant outposts – are what have kept me honest, kept me inspired, and kept me going. Every day, I learned from you. You made me a better president, and you made me a better man."

Trump: "It's all fake news. It's phony stuff. It did not happen. And it was gotten by opponents of ours, as you know because you reported it and so did many of the other people. It was a group of opponents they got together – sick people – and they put that crap together."

On The Creation Of Man

Obama: "We are all created equal, endowed by our creator with certain unalienable rights, among them life, liberty, and the pursuit of happiness."

Trump: "I will be the greatest jobs producer that God ever created."

Obama: "I committed to President-elect Trump that my administration would ensure the smoothest possible transition, just as President Bush did for me. Because it’s up to all of us to make sure our government can help us meet the many challenges we still face."

Trump: "Do you honestly believe that Hillary would be tougher on Putin than me? Does anybody in this room really believe that? Give me a break."

Obama: "For native-born Americans, it means reminding ourselves that the stereotypes about immigrants today were said, almost word for word, about the Irish, Italians, and Poles. America wasn’t weakened by the presence of these newcomers; they embraced this nation’s creed, and it was strengthened."

Trump: "We’re going to build a wall. I could wait about a year and a half until we finish our negotiations with Mexico, which will start immediately after we get to office. But I don't want to wait."

Obama: "Our democracy is threatened whenever we take it for granted. All of us, regardless of party, should throw ourselves into the task of rebuilding our democratic institutions. When voting rates are some of the lowest among advanced democracies, we should make it easier, not harder, to vote."

On The Future Of America

Obama: "My fellow Americans, it has been the honor of my life to serve you. I won’t stop; in fact, I will be right there with you, as a citizen, for all my days that remain. For now, whether you’re young or young at heart, I do have one final ask of you as your president – the same thing I asked when you took a chance on me eight years ago. I am asking you to believe. Not in my ability to bring about change – but in yours."

Trump: "Russia will have far greater respect for our country when I'm leading it and I believe and I hope — maybe it won't happen, it's possible."