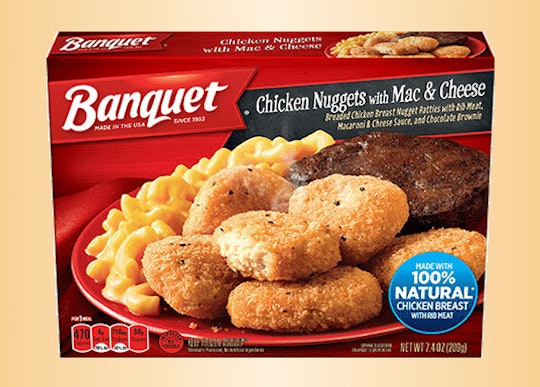 There's A Public Health Alert For These Banquet Nugget Meals

If your kid is anything like my toddler, that means they love scarfing down breaded chicken nuggets. He doesn't have a favorite brand, though he's a big fan of the dinosaur-shaped ones. Still, a new public health announcement from the U.S. Department of Agriculture's Food Safety and Inspection Service has me on alert. On Thursday, the USDA and Conagra Brands Inc. issued a public health alert for its Banquet Chicken Nuggets meal tray with mac and cheese and chocolate brownie due to potential salmonella contamination. Here is what that means for parents.

The USDA's food safety agency issued the alert for Conagra's Banquet Chicken Nuggets with Mac & Cheese meal because the brownie mix dessert included in the tray may be contaminated with salmonella, according to its announcement. Salmonella is a nasty bacteria responsible for salmonellosis, a type of food poisoning that causes diarrhea, fever, and abdominal cramps, according to WebMD. Salmonellosis usually lasts four to seven days, with symptoms developing 12 hours to three days after infection.

The public health alert applies to for the 7.4 ounce vacuum-packed Banquet Chicken Nuggets with Mac & Cheese tray with the code 3100080921 and a "best if used by" date of July 20, 2018. The Conagra Brands product also has the FSIS establishment number "P-9" printed on the side of the box. It affects more than 110,00 pounds of frozen meals.

A supplier notified Conagra Brands that an ingredient used in the brownie mix may have been tainted with salmonella, the FSIS said in its alert. The potential contamination was discovered after a consumer made a complaint. So far, there have been no confirmed reports of salmonella poisoning caused by the Banquet Chicken Nuggets with Mac & Cheese meal.

Conagra Communications Manager Kristine Mulford told Romper that the company tested the product "at the time of manufacture and there was no salmonella to be found." But Conagra worked carefully with the USDA to issue the public health alert "out of an abundance of caution," she said.

Mulford noted that news reports calling the alert a "recall" are inaccurate. The product has not been pulled from the shelves. According to Mulford, the risk of salmonella poisoning is eliminated when "the product is cooked thoroughly per the package instructions."

The FSIS advised customers who have any questions about the Banquet Chicken Nugget meal to contact Conagra Brands Consumer Affairs at 1-800-289-6014.

Thursday's public health alert comes less than three weeks after Conagra Brands voluntarily pulled a limited supply of Hunt's Chili Kits from the shelves. The Missouri-based food manufacturer recalled the Hunt's product due to potential Salmonella contamination in the chili seasoning packet included in the kit, according to the U.S, Food and Drug Administration. As with the Banquet Chicken Nugget meal, a supplier informed Conagra Brands of the potential presence of salmonella in a raw material used in the seasoning.