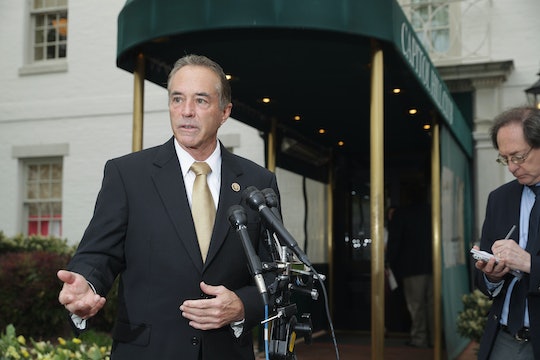 Congressman's Response To Shooting Is Understandable, But Ill Advised

On Wednesday, a gunman showed up at a practice session for a congressional baseball game in Alexandria, Virginia and shot five people, injuring Louisiana Rep. Steve Scalise, a lobbyist, a congressional staffer, and two police officers. Fortunately, none of the victims were killed, but the shooting itself was enough to trigger an immediate — and surprisingly varied — response from politicians across the country. Some chose to point out how the incident related to a larger epidemic of gun violence in the United States, but others had a different response: One New York congressman said he'd carry a gun from now on to stay safe.

Speaking to WKBW following the shooting, Republican Rep. Chris Collins said he would be carrying his gun on him from now on for safety. "You look at the vulnerability. I can assure you, from this day forward ... I will be carrying when I’m out and about," he said. He continued:

I have not been, even though I have a carry permit at home. On a rare occasion, I’d have my gun in the glove box or something, but it’s going to be in my pocket from this day forward.

While anyone can appreciate how being a politician — especially in today's heated climate — could make someone feel vulnerable, Collins' response is still the wrong answer.

The response to gun violence should not be that we need to further arm ourselves against that violence. There are, of course, examples of armed citizens preventing shootings, as a Washington Post round-up shows, but those events are exceedingly rare. According to the Violence Policy Center's most recent analysis, there were only 224 cases in 2014 of citizens justifiably using firearms to defend themselves or others. Between 2013 and 2015, intended victims of violent crimes used a firearm in self-defense in only 1.1 percent of crimes.

That low number isn't due to lack of guns, either. According to estimates made by the Congressional Research Service, the number of firearms owned by civilians hit 310 million in 2009 — officially outnumbering the amount of people in the United States. And it's not like a lack of guns are keeping people from disarming attackers, either: Pete Blair, director of research for the Advanced Law Enforcement Rapid Response Training Center (ALERRT), told Politifact that civilians stop around one in six active shooter incidents, and they usually do so by simply tackling the shooter.

Guess what is more common than civilians stopping crimes, however? Children finding guns and accidentally shooting people. In 2015 (the most recent year with available data), there were at least 278 incidents in which kids under 17 years old accidentally shot a person. Many children are also on the receiving end of those unintended shots, with research showing nearly 100 child deaths per year from accidental shootings. And those numbers pale in comparison to the amount of people the United States loses to homicide (10,945 in 2014) and suicide (21,334 in 2014) using firearms every year.

Conversely, stricter gun control has been associated with lower overall rates of both homicide and burglary, according to the Huffington Post — not just firearm-related crimes. Increasing the number of people toting around guns generally leads to an increase in violence, rather than the decrease that people like Collins seem to hope for.

Collins' feeling of vulnerability after the Alexandria shooting is a perfectly normal reaction to a traumatic event. However, the response to the violence seen in Virginia today should not be to arm every American in pursuit of this romanticized view of protection — it should be to make access to firearms much, much harder to acquire. That is what will actually save lives.