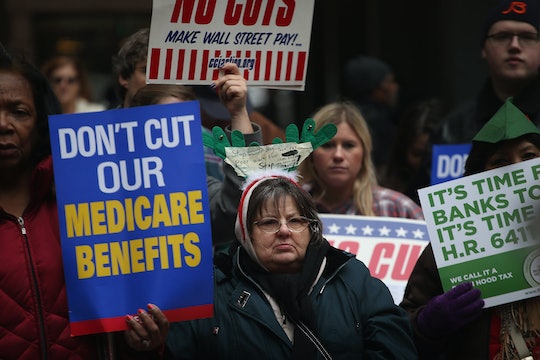 On Monday, House Republicans released their long-awaited healthcare plan designed to replace the Affordable Care Act. The American Health Care Act retained some popular ACA revisions — like offering protections to people with pre-existing conditions, and allowing children to stay on their parents' health care plans until they're 26 — but critics say the AHCA will ultimately restrict Americans' access to affordable healthcare, and will result in many of them ending up uninsured. In response, one congressman said the poor "just don't want health care," and suggested that those on Medicaid don't take responsibility for their health. He has since tried to clarify his statement, but Kansas Rep. Dr. Roger Marshall still sounds like he doesn't quite understand the reality of what far too many Americans living in poverty are actually facing.

In a recent interview with STAT, Marshall — a newcomer Republican Congressman who as recently as December was delivering babies as a obstetrician in his Kansas-based practice — spoke about his views on Obamacare and the GOP's approach to crafting a replacement. A member of the GOP Doctor's Congress, a 16-person group of lawmakers with medical backgrounds pushing for ACA reform, Marshall has argued that his first-hand experience as a physician showed him that Obamacare really didn't work well for hospitals and patients.

One specific aspect Marshall did not support? The ACA's Medicaid expansion. The ACA provided expanded funding for Medicaid in participating states, allowing the program to include an estimated additional 11 million Americans who earn up to $16,400 a year, according to CNN. The ACHA plans to end the expanded funding for new enrollees beginning in 2020 though, and will then begin instituting per-capita limits on state funding, meaning that the amount of Medicaid funding available will likely decrease. Critics have argued that by doing so, the ACHA would ultimately be taking away healthcare coverage from low-income Americans, but Marshall said he saw the issue differently. He told STAT,

Just like Jesus said, ‘The poor will always be with us.' There is a group of people that just don’t want health care and aren’t going to take care of themselves.

Just, like, homeless people. … I think just morally, spiritually, socially, [some people] just don’t want health care. The Medicaid population, which is [on] a free credit card, as a group, do probably the least preventive medicine and taking care of themselves and eating healthy and exercising. And I’m not judging, I’m just saying socially that’s where they are. So there’s a group of people that even with unlimited access to health care are only going to use the emergency room when their arm is chopped off or when their pneumonia is so bad they get brought [into] the ER.

Naturally, Marshall's comments were criticized by those who felt like he had been insensitive and unfairly judgmental. According to The Washington Post, Marshall attempted to explain his view in a follow-up statement, and argued that he had been trying to highlight the way he felt that the ACA disproportionately benefitted those on Medicaid, while ignoring the needs of the middle class:

I was ... saying that Obamacare has increased premiums on working, middle-class families by almost 200 percent in some places, and with deductibles of over $10,000, many don’t actually have access to health care. Coverage means nothing if you can’t afford access.

When I said, ‘the poor will always be with us,’ it was actually in the context of supporting the obligation we have to always take care of people, but we cannot completely craft a larger, affordable health-care policy around a comparatively small segment of the population who will get care no matter what.

The problem, though, is that even if Marshall really was intending to argue that middle-class Americans were being overlooked by the ACA's Medicaid expansion, his view still appears to ignore the very real fact that Medicaid is an important lifeline for millions of Americans, particularly children and people of color. And since states have actually had the option to opt-out of participating in the Medicaid expansion thanks to a June 2012 Supreme Court ruling, according to the Kaiser Family Foundation, data has been able to show that in states where the expanded coverage doesn't exist — including in Marshall's home state of Kansas — many Americans in need of healthcare coverage are being left out entirely.

Prior to the SCOTUS ruling, the Medicaid expansion was designed to be a national program meant to bridge the gap between the existing Medicaid program, and the subsidized Obamacare marketplace insurance plans. In other words, low-income Americans could be covered by Medicaid, while those Americans making over a certain amount could then receive income-based subsidies that would allow them to afford to purchase insurance plans through the marketplace. 19 states as of Sept. 2016 still had not opted in to the Medicaid expansion though, according to the Kaiser Family Foundation, creating a coverage gap for people making enough money that they are ineligible for Medicaid, but not enough money to be eligible for the ACA's premium tax credit subsidies. But it wouldn't take much to end up caught in the gap: in states without Medicaid expansion, the 2016 median income limit for parents was an annual income of $8,870 a year for a family of three. And in almost all of those states, childless adults were also ineligible.

Data from the Kaiser Family Foundation shows that an estimated 2.5 million Americans fall into this Medicaid gap due to states opting out of expanded funding. 54 percent of those in the coverage gap are non-white, and over half are either middle-aged or near elderly, meaning they are more likely to have increasing health needs. Although Marshall seems to think that expanding Medicaid just means that more Americans will have the chance to drain the system at the expense of those earning more and paying their way, studies have shown that uninsured Americans — like those in the Medicaid coverage gap — end up needing greater health care not because they don't care about prevention, but because they cannot realistically access it until they become eligible for Medicaid at 65. But at that point, of course, their medical issues have often progressed beyond what preventative care can offer, and while preventative care is a better investment and cheaper overall, for those without coverage, it's usually considered an unaffordable expense.

Of course, Marshall didn't say that he didn't believe in providing health care to low-income Americans, but he does seem to be saying that one of the reasons that the expanded Medicaid program is a waste of resources is because Americans in the program aren't using it for preventative care. That might be a reasonable argument against expansion if it were true, but according to Science Daily, a Jan. 2017 study from researchers at Indiana University and Cornell University found that, actually, low-income childless adults (aka, those who were previously ineligible for Medicaid before the ACA) are more likely to have a primary care physician than those in states without the Medicaid expansion, have improved self-reported health, and are more likely to take preventive care measures.

Overall, according to Indiana University researcher Kosali Simon, the study found that the ACA Medicaid expansion actually means that "more people are seeing doctors and taking steps to safeguard their health." It hasn't miraculously transformed the health of low-income Americans by any stretch — Simon also noted that the study found "no detectable reduction in obesity, smoking or heavy drinking" as a result of the Medicaid expansion — but the data doesn't support Marshall's insinuation that continuing to support the Medicaid expansion isn't a good idea. In fact, researchers noted that it is important to consider that risky health behaviors (like heavy drinking, smoking and obesity) haven't gotten worse, which refutes the misguided notion that those on Medicaid may be more likely to neglect their health since they aren't paying for it — something that Marshall seemed to be suggesting in his original comments to STAT.

In his defense, Marshall has claimed that his comments didn't come out the way he was intending them to, and as a new politician who has spent his career as a physician, perhaps it would be fair to give him the benefit of the doubt. But as someone who is also playing a key role in the development of what will become the nation's next major health care program, it's extremely concerning that his views about the motivation and actions of low-income Americans in relation to healthcare seem to not align with research.

Viewing the millions of Americans currently on Medicaid as people who cannot or will not take responsibility for their own health when they are also the very same people who have historically had the greatest barriers to actually accessing health care is hugely unfair and concerning. While it is of course important to ensure that the plan that replaces the ACA takes into consideration the concerns of middle-class Americans worried about their rising premiums, it shouldn't come at the cost of hardworking low-income Americans who need and deserve quality healthcare services as much as everyone else.