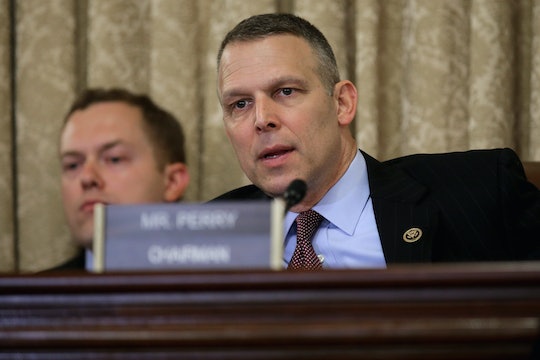 Congressman's Response To Paying For Maternity Care Is Off

Sometimes, being a parent, or becoming a parent, doesn't go according to plan. Needless to say, family planning can sometimes veer off course, which is why its important that maternity care is protected under insurance plans. One congressman thinks that family planning is solid — solid enough for him to vote in favor of the American Health Care Act. This congressman's response to paying for maternity care when you don't plan on having kids is so completely off and proves exactly why Obamacare does not need to be repealed.

When a local Indivisible group met with Republican Pennsylvania Congressman, Rep. Scott Perry, to ask him about why he voted "Yes" on the AHCA, things got a little intense. According to the Huffington Post, Perry had some choice words to say about maternity care, which influenced his decision in voting for the AHCA. "I don't want maternity care," Perry said. "I have two children, and we're not having anymore. I don't want to pay for maternity care."

What a novel concept. If only life was that simple. Perry continued, stating "Some people never want to start a family...some people don't want to own a Cadillac. But should we want to make everybody pay for a Cadillac?"

There are so many things that Perry's taxes pay for (such as funding the president's trips to the golf course) that he doesn't use. Therefore, his Cadillac argument is completely misguided. By being guaranteed the essential health benefits under Obamacare, people like Perry are protected in all scenarios. Sure, he might never go to the hospital, but when Perry accidentally slices his finger while chopping vegetables for dinner one evening, he will be grateful that his hospital visit was covered under his insurance plan. Further more, allowing states to waive and define what they believe are "essential health benefits" will ultimately be harmful, according to the Brookings Institution.

By voting in favor of the AHCA, representatives like Perry did not vote just to get rid of the parts of insurance plans they don't need, their vote was a significant loss to women, who could experience less coverage in their plan, see a significant cut in funding to Planned Parenthood, and be priced out of their healthcare.

Perry's argument isn't much of an argument at all. Essential health benefits, including maternity care, are essential for a reason.