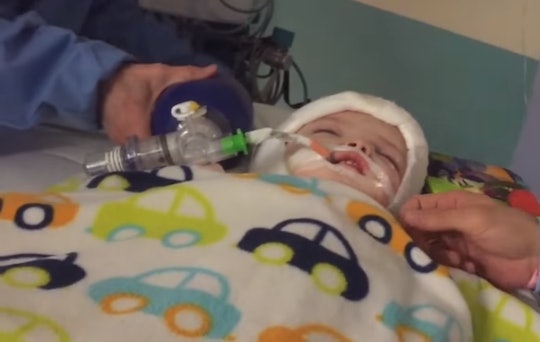 After 27 straight hours of surgery last week, Jadon and Anias McDonald, 13-month-old conjoined twins, are resting in separate beds on the road to recovery. Conjoined twins account for one out of every 200,000 births, and craniopagus twins, joined at head like the McDonald twins, occur in just one in 2.5 million births. Craniopagus twins have an 80 percent mortality rate if they're not separated by age 2, and one will often have a deficit once surgery has been completed.

CNN has been following the family's story, and their medical correspondent, Dr. Sanjay Gupta, was present during the boys' surgery. This was the fourth surgery in the separation process; three previous surgeries took place during which a medical team worked on separating blood vessels and brain tissue before the final separation took place at Children's Hospital at Montefiore Medical Center in New York. The team was led by industry expert Dr. James Goodrich, who's performed 18 craniopagus surgeries. The twins, along with their parents, Nicole and Christian, and their older brother, Aza, moved from Illinois to the Bronx to be closer Goodrich.

Until last week, the twins had never seen each other's faces, and could only be moved in tandem by both their parents. Nicole said she's looking forward to being able to pick up and hold her sons for the first time. A former pediatric physical therapist, she's been working with the boys to keep them from falling too far behind in their milestones, and said that before the surgery, she'd taught them both to push themselves up into crawling position. The family posted their sons' story on a GoFundMe page about a year ago. Having far exceeded their goal, they now ask that those wishing to help instead direct their donations to a friend whose baby is awaiting a kidney transplant.

Jadon was the first twin out of surgery on Friday, while his brother needed a few more hours after the separation. Even before the surgeries, Anias suffered from breathing, feeding, vision, and hearing issues, as well as heart failure and seizures. His road to recovery may be a little longer; he's still having seizures, but improving all the while. Jadon is now grabbing at his tubes and wires, tracking his parents with his eyes, and smiling. Although Anias isn't quite there yet, he has fluttered his eyes, and his heart rate has gone down in response to his mother talking to him and touching him. "It's just going to take time," said Nicole of his recovery. "It is all patience with Anias. There is no manual on this, so we just wait."