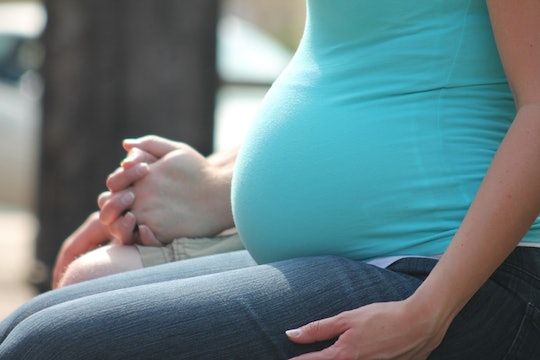 For those who have health insurance through the marketplace, the term "open enrollment period" might be a little anxiety-provoking. Getting signed up for health insurance before the deadline (usually the first of the year) is stressful enough, but life doesn't typically go along in accordance with the government's deadlines. So, what happens if you need insurance after the deadline has passed? That's why special enrollment periods exist for certain life events — and states can decide on them individually. A Connecticut bill would make pregnancy a "qualifying life event" for getting health insurance coverage. If approved, it would only be the second state where such legislation has passed.

The health insurance marketplace lays out certain situations where someone could get an Obamacare insurance plan outside of the regular open enrollment period like if they turned 26 years old and therefore could no longer stay on a parent's health insurance plan; if someone got married; if they lost a job that had benefits; or if they had a baby. What's interesting about the latter is that, at the federal level, a woman only qualifies for the special enrollment period after she's had a baby — meaning that she may not have health insurance coverage while she's pregnant. Without insurance, the average cost of routine prenatal care in the U.S. is around $2,000, according to the Kaiser Family Foundation.

On Wednesday, lawmakers in Connecticut submitted a piece of legislation that they hope would help ensure women in the state can mitigate the cost of prenatal care by making pregnancy a qualifying life event for insurance coverage. The bill would allow a woman to participate in a special enrollment period as soon as her doctor confirms her pregnancy, according to the Associated Press. The bill — which has bipartisan support amongst Connecticut's legislators — would therefore allow pregnant women to access health insurance plans that could be used for potentially life-saving prenatal care.

In addition to monitoring the growth and health of a developing fetus, prenatal care is also vital for making sure a woman is healthy throughout her pregnancy. Regular prenatal care is essential for detecting possible complications like gestational diabetes or high blood pressure — which can be dangerous for both mom and baby, according to the March of Dimes.

As of right now, New York is the only state where legislation making pregnancy a qualifying life event for exchange coverage has been signed into law; Gov. Andrew Cuomo signed off on the bill in 2015. California introduced a bill similar to Connecticut's last year, but it has not passed. Even still, that's only three of 50 states where women get pregnant — and not just during or before open enrollment periods for health insurance — and need coverage. Many organizations have been lobbying the Department of Health and Human Services to make pregnancy a qualifying life event on a federal level, but to no avail.

As reproductive health continues to be a hot-button political issue, it's unlikely that federal support would pass. So, it will be up to individual states to rule that pregnancy qualifies for special enrollment. If Connecticut's bill is successful, it could serve as a template for other states — if they're willing to have the conversation. Location, income, level of education, social support, and insurance coverage all influence the quality of prenatal care a woman can access — assuming she can at all, according to data from Child Trends. When it comes to infant health, the value of prenatal care is irrefutably demonstrated by statistics: when it comes to survival, birth weight is the single most important factor, according to the CDC — a metric that, without prenatal care, would be impossible to accurately know and track.