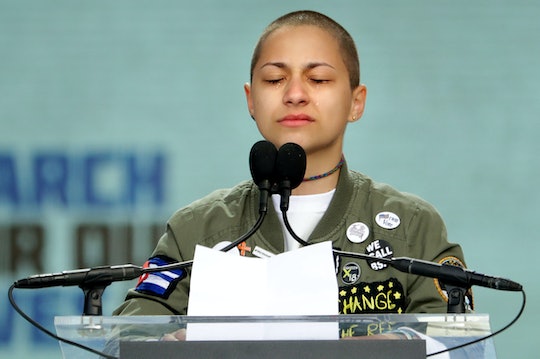 No, Emma Gonzalez Did Not Rip Up The Constitution

The Feb. 14 mass shooting in Parkland, Florida quickly reignited the heated debate over gun safety legislation, but it also gave way to something else: a wave of inspiring youth activism, led by the survivors themselves. In the days following the shooting, high-school senior Emma González emerged as an outspoken advocate for gun reform, and she has since become one of the movement's most recognizable faces. But her work has also made her a target for criticism, some of which has been truly awful. Case in point? Conservatives are sharing fake photos of Emma Gonzalez on social media, and it's completely infuriating.

Only three days after a gunman opened fire at her high school, Gonzalez gave a powerful speech at a Fort Lauderdale rally for gun safety that quickly went viral. Since then, she's been an outspoken critic of the National Rifle Association — she even confronted NRA national spokesperson Dana Loesch during a CNN Town Hall — and she was also instrumental in organizing Saturday's March For Our Lives. González and her peers weren't seeking any kind of attention until a gunman opened fire at their school, and it's easy to forget, while watching them rally a nation, that they are still kids. But their age and their grief hasn't stopped conservatives from attacking their efforts: senior David Hogg has been labeled a "crisis actor" by conspiracy theorists, and a Republican candidate for the Maine state house withdrew after comments labeling González a "skinhead lesbian," per the the New York Times. And the latest efforts to discredit their work are a strong reminder that kids, more than anyone, do not deserve this treatment.

Recently, González and three of her classmates appeared on the cover of Teen Vogue's March issue, and on Friday, the magazine shared a video of Gonzalez ripping up a target-shooting poster on its Instagram feed. But it didn't take long for internet trolls to turn to Photoshop, where they doctored the image to make it look like González was actually tearing up a copy of the United States Constitution instead.

On the one hand, the fact that the fake image of González is circulating should probably not be all that surprising — the internet is a fertile breeding ground for all kinds of offensive memes and images, especially in the current political climate. And given that there are many Americans who are very angry at the mere suggestion that perhaps it might be a little bit too easy for troubled individuals to purchase firearms and then go shoot up a school, it's also not surprising that this image has taken off specifically (it's the 2nd Amendment, after all, that always seems to be cited as the main argument against reform). But the doctored photo is still shocking, and it speaks to the reality that the Parkland survivors are facing while they dedicate themselves to trying to keep other young people from dying unnecessarily.

The original image seems to have originated as a doctored animation shared on Twitter by Gab, according to CNN. Gab bills itself as a "free speech social network ... where people, free expression, and individual liberty come first," and purports to be a "neutral platform," though the Gab Twitter account mostly just seems to be a series of tweets criticizing other users arguments and viewpoints, and bashing the news media, hosted under a Pepe-esque avatar.

Gab first posted the animation on Thursday, and it's since been retweeted 1,700 times. Gab noted in a follow-up tweet that the animation was "satire," and many of Gab's subsequent tweets have argued how great it is that so many people seemed to be offended or angered by it. But, as things often do on social media, the fake meme didn't just spread as an animation — it then took on a second life as a more-believable still image, according to The Washington Post, which some Twitter users appeared to believe was legit.

In other words, this isn't just a matter of calling out or making fun of a public figure (Gab later posted variations on the meme where Gonzalez' face had also been altered, which made it pretty clear the photos weren't actually real). The still image of González, which then began circulating on social media, mostly just turned into a way to stoke the collective anger felt by right-wing individuals towards the gun safety movement González has helped reinvigorate. It wasn't an effort to make a statement about gun legislation. It's only purpose was to unite people against González personally, and the danger they believe she represents.

That's not the only reason the image is uncalled for, though. It's a personal attack on González to be sure, but that's virtually inevitable when you have such a significant public platform and an opinion. But González isn't just an activist pushing for some form of social change right-wing Twitter doesn't like. She is literally an 18-year-old school shooting survivor. She has thrown herself into the movement because for her, and for her classmates, it is literally an issue of life and death.

Emma González and her fellow young activists could have easily retreated back to their families and friends and communities after the Parkland shooting, and it would have been entirely reasonable given the trauma they'd experienced. But instead they've been fighting to see the lawmakers many of them were too young to even vote for decide that something finally needs to be done about the nation's mass shooting problem. And all the while, they've been facing a seemingly-endless onslaught of judgment, anger, and hatred because of it.

No one is arguing that everyone has to like González, or that her political asks should be impervious to criticism. But the fake photos of her aren't being used to argue against her position, they're just a way to spread dangerous misinformation about someone's kid. And regardless of anyone's opinions on gun reform, absolutely nothing good can come from that.

More Like This
13 Is "Too Early" For Kids To Be On Social Media, Surgeon General Cautions
Barbie Honors Aviator “Queen” Bessie Coleman In Their Inspiring Women Line
Trans Youth Describe The Importance (& Joy) Of Family Support In Moving New Documentary
Michigan Right-Wing Group Wants To Erase LGBTQ+ Sex Ed
What Parents Are Talking About — Delivered Straight To Your Inbox