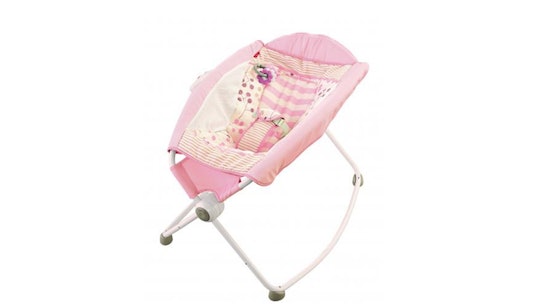 After the U.S. Consumer Product Safety Commission (CPSC) and Fisher-Price issued a joint safety alert on Friday regarding a popular baby product — urging parents not to use it with their babies after 3 months old, or when they start to roll over — Consumer Reports released a report on Monday, calling for the Fisher-Price Rock ‘n Play Sleeper to be recalled after several infants died while in the product. The CPSC noted in its warning that the agency is aware of 10 infant deaths that have occurred since 2015, but Consumer Reports alleges in its investigation that the Rock ’n Play is "tied to at least 32 infant deaths."

The CPSC noted in its safety alert on April 5 that infants had "rolled from their back to their stomach or side, while unrestrained" in the Fisher-Price Rock ’n Play, and that all 10 infants who died were 3 months old or older in age. The agency and Fisher-Price urged parents to stop using the product when the baby starts to show rollover capability, or by the age of 3 months.

Consumer Reports says, however, that its investigation found some of the infants reported to have died while using the product were younger than 3 months old. The nonprofit said in its report that these numbers should prompt a recall, not just a warning.

Fisher-Price said in a statement to Consumer Reports that the company acknowledged approximately 32 deaths since 2009, but said the fatalities were not due to a faulty product. Fisher-Price told Consumer Reports it does not believe "any deaths have been caused by the product," rather the deaths were due to medical or health conditions, or misuse of the product.

In a statement to Romper, Chuck Scothon, GM, Fisher-Price, said: "The safety of children is our highest priority. The loss of a child is tragic and heart-breaking." It continued:

For almost 90 years, generations of parents have trusted Fisher-Price to provide high-quality and safe products for their children, and we work hard to earn that trust every day. We stand by the safety of the Rock ‘n Play Sleeper. The product meets all applicable safety standards, including those of the international standards organization, known as ASTM International, and is certified by the Juvenile Products Manufacturers Association (JPMA). We continue to work closely with the Consumer Product Safety Commission regarding the safe use of our products, including the Rock ‘n Play Sleeper. It is essential that the product warnings and instructions are always followed. We will continue to do all we can to ensure that parents and caregivers have the information necessary to create a safe sleep environment for infants

Consumer Reports noted in its report that while "certain cases did have contributing factors such as illness or additional bedding, the number of incidents associated with the Rock ’n Play Sleeper, combined with long-standing expert medical advice that babies should sleep on firm, flat surfaces, raises serious safety concerns about the product."

The CPSC told Romper it is continuing to investigate whether the Rock ’n Play is safe for use, but does not feel the need for a recall yet:

CPSC has identified a hazard associated with rollover but is continuing to evaluate the product and investigate whether it contains a defect. While that work continues, the agency wanted to take the interim step to notify the public of the risk of death that can occur after an infant begins to rollover. We are continuing to investigate the product and, if the evidence indicates a need for a recall, we will take that step. At this time, we are focusing on deaths associated with the rollover hazard, though we acknowledge that we are aware of other deaths that have occurred in a Rock ‘n Play.

The Rock ’n Play has been popular for several years, according to The New York Times, with parenting blogs and sites touting its utility. But in a 2013 blog post, one pediatrician sounded an early alarm against the device. Dr. Roy Benaroch from Atlanta looked to sleep guidelines from the American Academy of Pediatrics that recommend placing an infant on their back rather than inclined, with no bedding or toys, to sleep. As he told The New York Times, "...babies should be placed to sleep on a firm, flat surface, and on their back. The Rock ’n Play is neither firm nor flat."

The CSPC issued its own, general warning about inclined sleep products in May 2018, saying that parents should "always use restraints and stop using these products as soon as an infant can roll over."

In a statement on the company's website regarding the Consumer Reports investigation and the safety of the Rock ’n Play, Fisher-Price said:

We continue to work closely with the Consumer Product Safety Commission regarding the safe use of our products, including the Rock ‘n Play Sleeper. It is essential that the product warnings and instructions are always followed. We will continue to do all we can to ensure that parents and caregivers have the information necessary to create a safe sleep environment for infants. That is why we also provide guidance about how to use our products on the front of the product packaging, in the product instructions, and on our website.

Keeping babies safe is a parent's number one priority, so if you have any questions or concerns regarding safe sleep practices or how to safely use a product with your infant, check in with your pediatrician for an expert opinion and guidance.

Editor's Note: This article has been updated to include a statement from Fisher-Price.