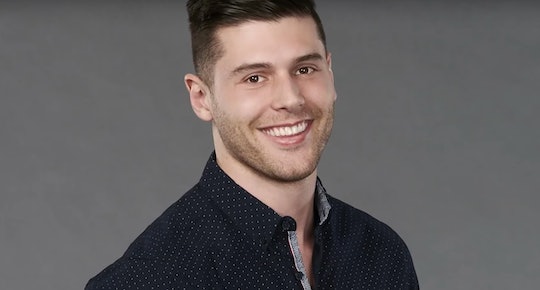 Another season of our favorite time-honored tradition of selecting long-term partnership from a tiny group of attractive and eligible strangers while on national television is finally upon us. Though I would never knock the Bachelor franchise for all the entertainment it's brought us over the years, some recent claims from one new romantic hopeful regarding his parentage has left some viewers and myself skeptical of its legitimacy. One contestant on the new season of The Bachelorette claims he's a sperm donor to 114 kids, but that's probably not entirely true and this is why.

For those who need a quick catch-up, here's the situation: The Bachelorette premiered this week, on May 13. As is the case with every new season, ABC released the contestants official bios beforehand, as a sort of teaser for the show. Hannah Brown — former Bachelor contestant — is the "Bachelorette" of choice, and she's got some interesting suitors lined up. Namely, 25-year-old Matteo.

The Bachelorette contestant said that he has fathered over 100 children as a sperm donor, according to Inside Edition. Though he's old enough to have donated sperm, how legitimate are these claims? Can he even know for sure how many children were produced from his sperm? Are there psychological implications for himself, or a future partner? There's a lot to unpack here.

Firstly, sperm donation is the process of selling semen to individuals or couples who want to conceive a baby, according to the Mayo Clinic. The sperm is collected in a sterile cup at a sperm bank, and the ejaculate can later either be put into the individual who wants to conceive directly, or used for in-vitro fertilization.

For many individuals, the appeal of sperm donation is the payout, though sperm banks such as one in Phoenix, Arizona, state that men might only get around $70 per donation. This could be incentive to donate multiple times, which was perhaps the case with Matteo's situation, if his claim is indeed true.

However, a significant factor to be aware of through this process is that it is often anonymous, according to the American Pregnancy Association, though exceptions can be made if the donor wants to. LegalMatch explains that when the child turns 18 to 21, depending on the state, information regarding their biological father can be released if the donor agrees. However, with most facilities, the donor's legal parenting obligations are waived. At 25 years old, any children Matteo's sperm may have fathered wouldn't be old enough yet to reach out or connect with him.

Be that as it is, according to the Chicago Tribune, thanks to DNA testing services like 23AndMe, more and more "donor-siblings" are able to connect not only with their fellow half-siblings, but potentially with their biological parents as well. It's an unprecedented loophole, but even if every single child Matteo's sperm was used to conceive somehow contacted him through one of those services, the probability that he knows the actual number of children is very, very slim.

Without official records — which won't exist until the children are of age — Matteo likely won't know any of this for certain, as The Atlantic explained, and at this point, it's likely an estimation.

But what about the long-term implications for himself, the kids, and a future partner? Well, it goes without saying that becoming a biological father — however the means — could be pressing as the years go on. He may not care now, he may care a lot later. He may not care about it ever. It's impossible to say, of course. As a partner, it's up to that individual to decide whether or not it's something they are alright with. And as for the kids themselves, well, that's a more complicated issue.

Peter Schlegel, the president of the American Society for Reproductive Medicine, told The Atlantic that using the same donor's sperm more than 100 times is too many, and that the ASRM suggest no more than 25 births per sperm donor per 800,000 person populous, so as to prevent potential incest. “It’s concerning to have single donors used too much,” he told the publication.

Wendy Kramer, the Director of the Donor Siblings Registry, tells Romper that Matteo likely made a guess on how many children he's fathered, as they would be too young for DNA testing, and there would be no way to officially know. On top of that, according to Kramer, no one bank keeps record of how many kids are born from just one donor. As for the quantity, well, there's issues with that, too. As Kramer explains, there are serious medical implications for "creating groups of 50, 100, or 200 kids with a single genetic parent," not to mention the psychological implications for the children themselves, if they know they are amongst so many half-siblings.

Though the claim is most likely untrue and undoubtedly hard to prove, especially at this moment, the possibility that Matteo has fathered multiple children through sperm donation is likely, and there is a chance they might reach out a few years down the line. It seems the variable now is whether or not this will matter to Hannah, so Bachelorette fans will have to just have to wait and see.