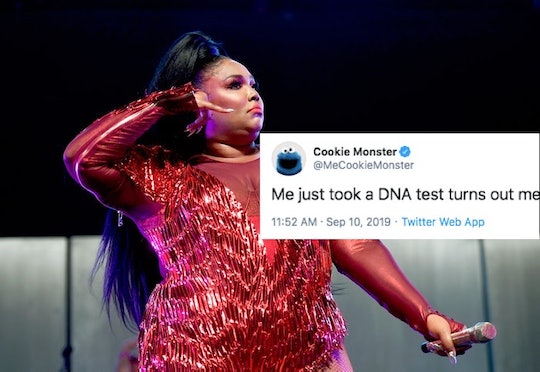 While our favorite Sesame Street characters have been collaborating and covering some of our favorite pop songs for years, fans are in for a real treat with Cookie Monster and Lizzo's "Truth Hurts" lyrics that have gone viral on social media. Honestly, it's so perfect and catchy, you have to wonder how is this just happening? Either way, it's a delightful gift the world didn't know it needed and is a better place with it.

On Tuesday morning, Cookie Monster's official Twitter account posted a riff on some Lizzo's lyrics: "Me just took a DNA test turns out me 100% cookies..." When she saw the post, Lizzo replied with some pretty stellar lyricism: "EVEN WHEN ME CRUMBLE CRAZY ME GOT SHORTBREAD PROBLEMS THATS THE MONSTER IN ME, NOM NOM THEN ME EAT EM THATS THE COOKIE IN ME," she replied on Twitter.

While that interaction was pretty much satisfying enough on its own, fans and followers of both of them started chiming in with their own renditions of the lyrics.

"YOU COULD HAVE A BIG BATCH, WAY COMMITTAL. IF YOU RECORD THOSE NEW LYRICS, JUST FOR TWITTER. FREE CHIPS AHOYYYYYYYYY!, NOTHING HOLDING US BACK. AND THAT'S THE SOOOUUUNND OF YOU RECORDING THAT TRACK?" Chips Ahoy replied. "YOU COULDA HAD CHOCOLATE CHIP, MILK INCLUDED," said one fan. "CRISPY OUTSIDE, CHEWY CENTER," replied the next.

"Truth Hurts" is reaching its second week at No. 1 on the charts, according to Billboard, though as Rolling Stone previously explained, it was sort of a "sleeper" success in that the song was recorded not as a single, but a different track on an album released back in 2017. Be that as it is, it's one of the most popular songs in the country right now, with everyone knowing the lyrics well enough that they could riff of them, even Cookie Monster.

However, despite the astounding success, in an interview with ELLE that was released last week, Lizzo opened up about why she almost quit music right as "Truth Hurts" debuted. "I just felt like I was throwing music into the world and not even making a splash," she told the magazine. "A tree was falling in the forest and not making a sound, you know? I was crying in my room all day." She went on to tell ELLE that her producer consoled her by telling her that even if her music wasn't important to anyone else, it was important to them, and that's what matters. "I just made the decision to keep going as an artist," she said. "And I’m so grateful I did, but it was by the skin of my teeth."

Of course, she's come a long way since that point in her life. (Just yesterday, Entertainment Tonight reported that Rihanna said she'd "love" to collaborate with her, and called her a "bad*ss."). From just getting started and wondering if she'd ever have any influence to inspiring thousands of Twitter users to chime in on her lyrics with a Sesame Street icon, it's clear that Queen Lizzo is going absolutely nowhere. Let's hope this whole thing can only lead to an on-air duet between her and Cookie Monster.