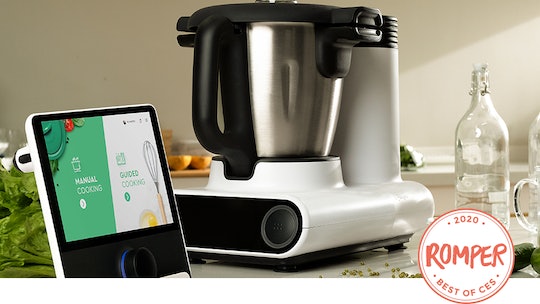 Um, This Cooking Robot Can Tell You What's For Dinner *&* Help You Cook It

The robot takeover is fully upon us, and it's bringing bisque. At this year's Consumer Electronics Show (CES) in Vegas, there will no doubt be myriad automatons ready to help out in the home, and this cooking robot named Julia from CookingPal will be a standout, for sure.

We Americans are nothing if not fond of kitchen gadgets, and this one is an absolute doozy. Cooking robot "Julia," can chop, weigh, measure, steam, knead, cook, emulsify, whisk, grate, and grind your food. Using the accompanying hub, you can look up recipes and follow step-by-step instructions to create a complete meal. Through Julia, you can also make grocery lists, order groceries, and apparently Julia can even decide what to cook based on what you have on hand. You know, thanks to her inbuilt home surveillance system — I mean intelligent camera that can capture your fridge and pantry items on photograph, which our intelligent overlords — I mean her algorithms — then utilize to determine what recipes you can create. Like MacGyver, but creepier. And, like Netflix, Skynet, or Amazon, the more you use Julia, the more curated your results will become. So eventually, my Julia will be thousands of recipes for macaroni and cheese and also chicken nuggets. Thanks, kids.

The whole system is arguably very impressive. It looks like a standard restaurant-style food processor and iPad, but the way the two units work together is pretty cool. Yes, humans will still be required to make some basic preparations for the foods cooked (we're not obsolete just yet), and most of the time users will probably be adding a cooked protein to the finished dish (unless the protein is being steamed). But for foods like soups, stews, mashed potatoes, salsas, and sauces, Julia might be a helpful addition to a modern kitchen — especially for users who aren't fans of cooking. It even cleans itself up.

While the price hasn't yet been announced, we can assume that it won't come cheap. AI-based equipment is very rarely affordable to most people. However, like smart fridges, smart phones, and tablets, the more popular it becomes, the lower the price will be. This is the first of its kind, so expect to hear all about how it performs at CES as it goes head-to-head with chefs in real time at the CookingPal booth.

We aren't quite at Rosie-level kitchen robots just yet, but we aren't that far from her, either. This cooking robot is just the next step in the electronic evolution of the kitchen. The question is: how many people will be interested?