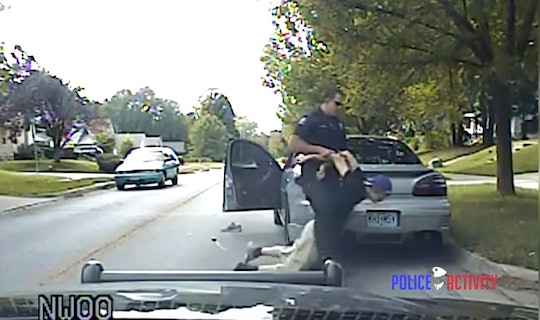 A convicted police officer was sentenced this week for Tasing 17-year-old Bryce Masters until his heart stopped. Missouri Officer Timothy Runnels pulled Masters over in September 2014 after he was incorrectly told the teenager's license plate was linked to a wanted suspect. Last week, Runnels pled guilty to violating Masters' civil rights. The cop, who tased the teen for 21 seconds was subsequently sentenced to four years in prison.

A federal judge has now released the footage of the Tasing, which shows Runnels asking the teenager to get out of the car. The teen asks repeatedly, "Why officer? Am I under arrest?" The officer continues telling him to get out of the car. At this point, Runnels appears to reach into the vehicle and pull Masters out himself before Tasing him. Masters screams and falls to the ground.

Runnels Tased the high school senior for 21 seconds, four times longer than he was trained to do, according to CNN.

"I told ya," says the officer, before dragging Masters' limp body to the pavement. He then asks, "You don't like to play by the rules, do you?"

The incident sent Masters into cardiac arrest. Runnels called an ambulance, but did not check on Masters while waiting for the paramedics to arrive. Doctors induced him into a coma because he did not have enough oxygen traveling to his brain. The Tasing incident caused Runnels brain damage and memory loss.

Tasing incidents are on the rise in the United States. Eighty-one percent of police departments now use stun guns and tasers, according to a 2015 Justice Department report, compared with only 7 percent of departments in 2000.

Runnels nearly killed Masters, and could affect him for the rest of his life. Police say that Masters was not cooperating, but the judge did not buy it. He sentenced Runnels to four years in jail.

The dash cam video, which was played during the trial, is one more example of police brutality. Cell phone and dash cam videos showing police officer suing excessive force have rocked the nation in recent years, sparking a national debate about police conduct.

The sentencing stands in stark contrast to the lenient verdict given to former Stanford swimmer Brock Turner for raping an unconscious girl. Turner's sentencing shocked the country and has led to calls for harsher punishments for rape.

More Like This
What Will Parenting Look Like 5 Years From Now?
Adele’s Grammy-Nominated Album Features A Beautiful Song Written For Her Son Angelo
Kendrick Lamar Owes His Latest Grammy Nominations To His Two Children
A Breakdown Of The Dutton Family Tree In The 'Yellowstone' Prequel '1923'
What Parents Are Talking About — Delivered Straight To Your Inbox