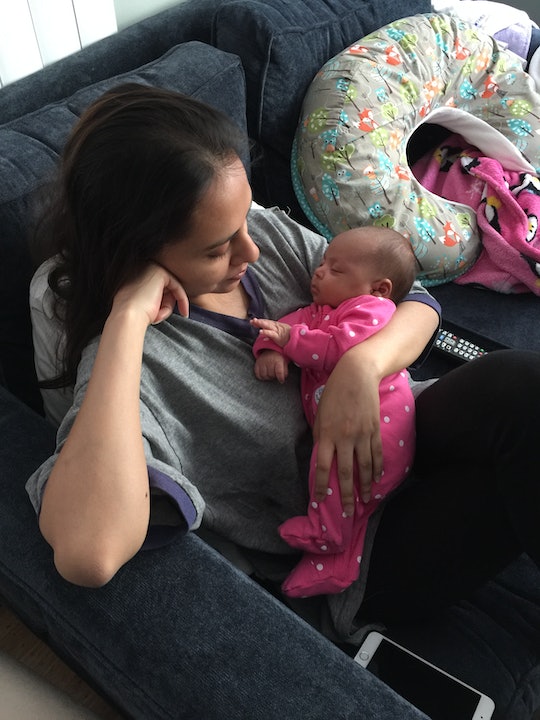 I’m Struggling With Postpartum Insomnia, & I Know I’m Not Alone

If you've never Googled "Will I ever sleep again?" or "How long can I go without sleep before dying?" are you even a parent? For the past three years sleep has been on my mind and the one thing I desperately wanted, yet it was unattainable. Sleep deprivation started during my second trimester because, like a lot of women, trying to find a comfortable way to sleep while pregnant was difficult for me. Plus I kept waking to use the bathroom. I expected way more sleepless nights when my daughter was born but I had it drilled in my head by experienced parents that I'd be able to "sleep when my baby slept." Little did I know that coping with sleep deprivation after my baby would pretty much require me to sleep-train myself.

Trying to nap when my daughter did was difficult because I always had something to do like chores, pumping, or basic human functions like using the bathroom, eating or showering. And on the rare occasion that I was able to nap, her naps were short and I felt worse instead of refreshed. I had no idea just how long I'd have to go with out sleep and I had no idea that getting my daughter to sleep through the night wouldn't be my only battle. I thought once she finally started sleeping better, I would too. But it wasn't that simple.

On average, babies start sleeping through the night around 6 months old, per Parents. I desperately waited for that milestone and since my daughter was meeting all of her other milestones at the average rate, I expected her to start sleeping longer stretches at 6 months as well. When she didn't, and her sleep was still all over the place, I decided that my husband and I needed to do something because every parent we knew told us that it wasn't normal. And so, we read every book and article and researched as much as we could. We tried everything — sleep training, co-sleeping, and every thing in-between. Nothing worked.

Although most of the parents in my circle claimed to not have experienced this, it was the average experience for parents on online forums. We were not alone. But I still clinged to hope. There had to be a way to get more sleep.

When my daughter was around 9 months old, I grew even more desperate and started buying every thing on Amazon that claimed to help babies sleep more soundly. We bought a sound machine, pacifiers, and even a magic sleep suit that claimed to be the miracle every parent needed. At the end, all I had was a hefty tab, dark circles under my eyes, and regret. After all of that, the researching and the endless search for a magical product, we gave up.

I had gotten so used to waking several times a night and I couldn't sleep longer than two- to three-hour stretches.

Talking about sleep and ways to get more was taking over our lives. We were losing our minds with theories and techniques and we were done. We went with out a solid night of sleep for way longer than we ever thought. My daughter didn't start sleeping through the night until she was around 21 months old. When it finally happened, my husband and I were ready to throw a parade. It's a pivotal moment in parenthood, when every thing seems to align. It's the moment I had been waiting for.

After a few weeks, we realized it wasn't a fluke and for the most part my daughter was sleeping like, well, a baby. And so was my husband. There was just one small, teeny-tiny problem... I wasn't getting much sleep at all. I had gotten so used to waking several times a night and I couldn't sleep longer than 2- to 3-hour stretches. I couldn't understand what was happening. I had no idea that even though sleep-training didn't work for my daughter, I would have to sleep-train myself.

As it turns out, difficulty sleeping is common among new moms. Dr. Leslie M. Swanson told Michigan Medicine, "I often refer to the perinatal period, or the time immediately before and after birth, as a perfect storm for insomnia, which greatly increases the risk for postpartum depression. Stress and life changes, positive or negative, are the biggest triggers for insomnia. So the arrival of a new baby, even under the best of circumstances, is a likely trigger.

Other changes, such as the major drop in reproductive hormones (which influence the body clock), and a shift for the brain to be more alert to listen for the baby, can also fuel chronic sleeplessness. Not being able to sleep even though your baby is sleeping is actually more common than you'd think. It's called postpartum insomia.

Postpartum insomnia can be a symptom of postpartum depression or anxiety, though not always, but after talking to my doctor and other parents, I realized I needed to re-establish a healthy sleep routine, because for almost three years it had been so sporadic.

So, although my husband adjusted quickly to sleeping eight beautiful hours a night, I had to work on it. I had to create a bedtime routine. Part of my bedtime routine was reducing screen time two hours before bed, using a sound machine, and going to bed and waking up at the same times every single day. Adjusting to actually sleeping through the night was way more difficult than I ever imagined it to be.

When you're a parent, getting your baby to sleep seems to be on every parent's wishlist, but no one really talks about how the effects of sleepless nights for moms and dads can last way beyond those of your infant. It's still difficult for me to sleep soundly, but it's getting better.