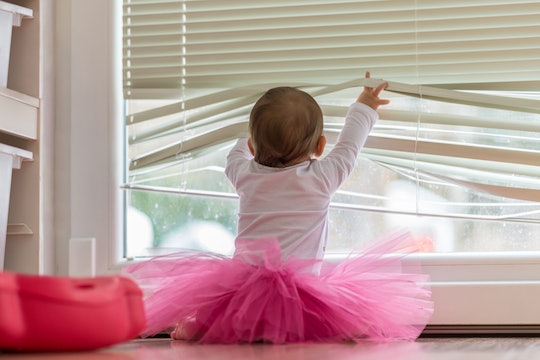 Corded Blinds Won't Be Sold In Stores Anymore, & It's About Time

For those who haven't been through the process, baby-proofing a home can be quite the endeavor. From outlet covers to cabinet locks, stove locks, corner pads, safety gates, getting rid of/putting away breakables and tiny objects — and so much more – ensuring your little one has a safe space to explore can be overwhelming. Especially considering there are plenty of not-as-obvious dangers lurking in plain sight. At least the Window Covering Manufacturers Association is working to eliminate one household strangulation risk. Because effective Saturday, Dec. 15, corded blinds won't be sold in stores anymore. And it's about time.

Yep, you read that correctly. As of today, products sold in a retail store or that can be ordered online as ready-made will no longer contain hazardous cords, ABC News reported. This new industry-wide policy was a result of a collaboration between the Window Covering Manufacturers Association (WCMA) and the Consumer Product Safety Commission (CPSC.) “All companies who manufacture, distribute, or sell window coverings in the U.S. must comply with the voluntary safety standard or face enforcement action by the CPSC and/or be open to legal action if non-compliant products are sold,” WCMA Executive Director Ralph Vasami said in a statement.

It's worth noting that people who still need corded blinds will be able to custom order them, according to ABC News. (You know, like the elderly and those with disabilities.) However, these blinds will also be made safer under the new standard, as well.

So what's the big deal with corded blinds anyway, you ask? Let's take a look at the stats. According to the CPSC, there were 50 reported fatalities linked to window cord strangulation among infants and young children between 2012 and 2017. That's 50 lives needlessly lost, all because of a window covering.

Furthermore, a 2017 study published in the journal Pediatrics revealed that between 1990 an 2015, roughly 17,000 children under age 6 wound up in the emergency room for injuries related to corded blinds, USA Today reported. (This translates to approximately two children per day.) During this time period, at least 255 children died in entanglement accidents, according to the study.

If you're wondering what the corded blinds ban means for you and your family, here's the scoop. Even though you won't be able to purchase them at a store or order them online, plenty of homes across the nation will likely have corded blinds for years to come. Still, the CPSC recommends that you replace corded window coverings with cordless ones to prevent the deadly strangulation hazard. However, if you are unable to switch to cordless window covering — because money is tight, or for whatever reason — the CPSC has offered the following safety tips:

Overall, it seems Twitter is on board with the corded blinds ban. However, they'd like to see something else added to the list. One person tweeted, "Blind cords hurt kids so they go cordless. The CDC warns everyone about bad lettuce and we throw it out. Hundreds of kids get murdered each year at school with guns but we do nothing."

Yet another person wrote, "Could we add guns to this list?"

Personally, I'm all for stricter gun safety laws. Our country's serious gun violence issue aside, though, I'm so glad to see the industry has kicked corded blinds to the curb. They're a needless risk to children — and so many lives will be saved as a result of this common-sense policy. Bravo to the CPSC and the WCMA for the accomplishment!