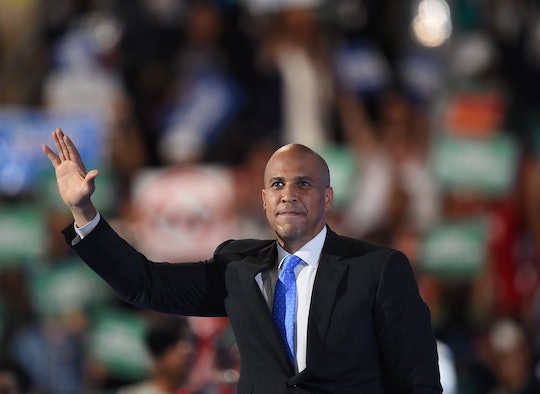 The opening night of the Democratic National Convention was geared up with plenty of passionate speakers who were ready to pump up the crowds. One high-profile moment that had everyone talking was junior Democratic New Jersey Sen. Cory Booker’s DNC speech. The senator's powerful and moving address, in fact, had everyone chanting with him.

More Like This
Jessica Simpson Calls Daughter Maxwell Intuitive & Powerful In Birthday Post
Everything You Need To Know About The Proud Family Reboot Coming To Disney+
Bindi Irwin Has Been Sharing The Cutest Photos Of Her Daughter
Wait, Did The Government Actually Do Something For Parents?

The senator’s speech touched on the theme of the night — "United Together" — and used his prime time speaking slot to powerfully tell fellow Democrats why they need to fight for economic inequality in the United States.

"We have a presidential nominee in Hillary Clinton who knows that, in a time of stunningly wide disparities of wealth in our nation, America's greatness must not be measured by how many millionaires and billionaires we have, but by how few people we have living in poverty," Booker said on Monday evening.

To combat some of the controversial statements Republican presidential nominee Donald Trump has said throughout his campaign, Booker quoted lines of the famous Maya Angelou poem "I Rise," saying these words capture American history.

"America, we will rise!" Booker exclaimed, speaking on the struggles and history slavery and immigrants in the United States. "Liberty is not secure for some until it's secure for all."

"Let us declare, love always trumps hate," Booker passionately said to the crowds. "America, our best days are ahead of us!"

Booker had the crowds loudly chanting and applauding throughout his speech and many took to social media to praise his powerful and impassioned speech. One Twitter user said his words made her "heart sing." Some were so taken by his speech that they asked if he'd would become the second black President of the United States. He did make it on Clinton's VP shortlist, so their dreams may not be too far off.

"Together with Hillary Clinton as our president," Booker concluded his speech. "We will rise!"