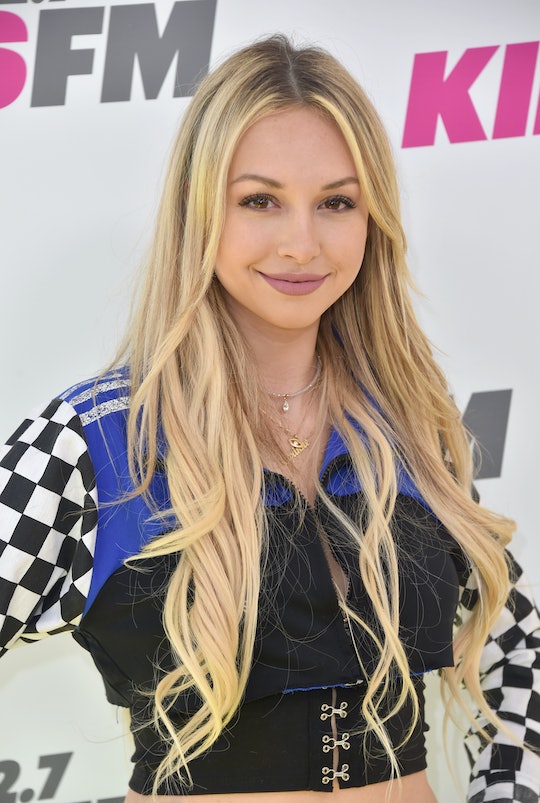 The fourth season of Bachelor in Paradise was a contentious one before a single episode even aired. Production was halted early on in filming so that alleged sexual misconduct between Corinne Olympios and DeMario Jackson could be investigated. There was some question whether sexual activity between the two had progressed without consent, but after an investigation by Warner Bros., and Corinne's representation, as well, both came up with no evidence of sexual misconduct. Corinne has released statements since the news broke, but in her first interview Corinne Olympios says that medication and alcohol caused her Bachelor in Paradise black out. She also shared her feelings on how the situation was handled, as well as how she's doing now. (Romper reached out to Corinne's lawyer and did not hear back.)

Shortly after filming was halted, Warner Brothers determined that no misconduct had taken place and filming was set to resumed. But, that didn't mean the fallout of the entire ordeal wasn't still being felt. In her interview with Good Morning America, Corinne spoke about the backlash she faced following the incident, with assumptions and judgements being passed on her by the media. It was difficult for her to deal with so much outside pressure while still trying to figure out what had happened, because she had very little memory of the night in question.

"It actually was — I did drink, you know, too much, I definitely understand that," Corinne said. "But I was also on a medication that, you know, severely blacks you out and impairs your judgement and, you know, messes with your balance that I didn't know you were supposed to not drink on, and so it really just caused a horrible, horrible blackout and I just — it was like I went under anesthesia and then just like woke up."

Corinne called herself a victim of the media, then explained further what she meant by that in an interview with People. "I saw myself as a victim of having something serious happen to you and have the media paint your a certain way that you know you aren't and having all these people make their judgements and comments and they don't even know what happened or went on," she said.

"That's what I'm a victim of. I never meant that I was a victim of DeMario. I strongly believe he had no bad intentions at all. It was all good. It was unfortunate that no one really knew how intoxicated I actually was at the time. I believe that nobody knew that. It was nobody's fault. I was a victim of not really knowing what happened at the time. We were just really trying to get to the bottom of everything."

Since the news broke and filming was suspended, Corinne has been trying to lay low and heal while weaning herself off the medication that contributed to her black out. In her interview with Good Morning America, she said that she did watch some of the footage from the incident, describing it as feeling as though she was watching "not me, I'm watching someone else. I was in shock."

However, Corinne does not blame production for the resultant media firestorm. She would hope that if a producer saw something that made them uncomfortable, they would stop to investigate and make sure everyone involved was safe.

Corinne will continue to discuss what happened during her brief time on Bachelor in Paradise when she appears in the August 29 episode for a sit-down with host Chris Harrison.