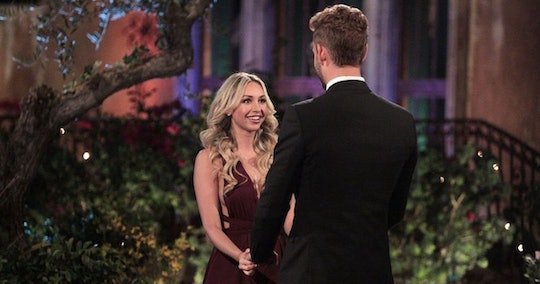 Corinne's Music Video Past Is A Must-See

Corinne Olympios has easily been the most popular contestant on The Bachelor Season 21 (for better or worse) since the moment the 24-year-old's now-famous nanny handed her a bowl of freshly cut cucumbers in the premiere episode. By all accounts, the Miami native has been loving the notoriety and embracing her role as the season's "villain." She's spent the first four episodes of the season repeatedly bringing up 1) her love of naps, 2) her nanny, and 3) the fact that she runs a multi-million dollar company, but the recent unearthing of an entry from Bachelor star Corinne's music video past proves that there's more to her than meets the eye.

The internet is going absolutely crazy over the recent discovery of Nick Viall's female suitor in an old music video. Believe it or not, Corinne appears very briefly (in a very minor role) in the 2011 video for "Zip & A Double Cup," a song by rapper Juicy J also featuring 2 Chainz and Tha Joker. She's one of many women who appear in a club scene in the video. Corinne is 24 years old now, so at the time the video was filmed, she would've been just about 18, long before her days on The Bachelor ever began. You can check out the video below:

Here's a screenshot from the video, where you can see Corinne (or someone who looks incredibly similar) pretty clearly:

Ironically, Corinne looks a whole lot like she's napping in the video, something the Bachelor contestant has been VERY vocal about loving. Fans on Twitter were quick to point out Corinne doing what she does best in the video.

Corinne's appearance in the video shouldn't be all that surprising. Despite the fact that, on the show, she's only mentioned her career as a businesswoman, there's been plenty of media coverage on her past as a model and actress. Her Instagram account is filled with modeling shots, both from her time before and after filming The Bachelor. Her ExploreTalent profile's "short resume" section even mentions that she has "worked on music videos with artists such as [...] Two Chainzz and Juicy J." She must've been referencing "Zip & A Double Cup" there.

I wonder what other Corinne-featuring music videos are out there — and if she's napping in all of them, too.