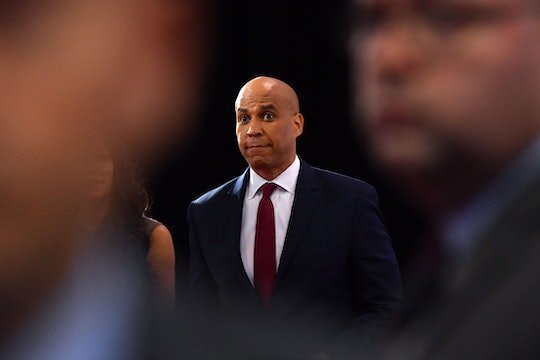 The field of Democratic candidates vying for the White House narrowed Monday when Sen. Cory Booker dropped out of the 2020 presidential race. The New Jersey senator announced his decision to suspend his presidential campaign in a message to supporters that was shared via email and on his social media channels.

"It's with a full heart that I share this news — I’m suspending my campaign for president," Booker wrote on Twitter. "To my team, supporters, and everyone who gave me a shot — thank you. I am so proud of what we built, and I feel nothing but faith in what we can accomplish together."

Although confident in his strategy to unite voters around a common purpose, Booker told his supporters that a lack of financial backing meant he no longer saw a path to victory, NBC News reported. "Our campaign has reached the point where we need more money to scale up and continue building a campaign that can win — money we don't have, and money that is harder to raise because I won't be on the next debate stage and because the urgent business of impeachment will rightly be keeping me in Washington," he told supporters, according to NBC News.

Booker's exit makes former Massachusetts Gov. Deval Patrick the sole black candidate in this year's election. A relative late-comer, Patrick didn't announce his candidacy until November 2019. He's since struggled to gain ground amid a still-crowded field of competitors and has failed to make it onto at least one state's primary ballot, according to CNN.

Six of the remaining Democratic presidential candidates are expected to participate in a CNN/Des Moines Register debate in Iowa on Tuesday. Booker, along with six other candidates, failed to meet participation requirements for the debate, including a donation threshold of at least 225,000 unique donors and at least 1,000 unique donors per state for a minimum of 20 states. As a result, Tuesday's debate is expected to include just former Vice President Joe Biden, South Bend Mayor Pete Buttigieg, California businessman Tom Steyer, and Sens. Bernie Sanders, Elizabeth Warren, and Amy Klobuchar.

While announcing his decision to suspend his presidential campaign on Monday, Booker appeared committed to continuing to campaign against President Donald Trump. While the New Jersey senator did not say whether he would endorse a candidate in the primary, he vowed to campaign on behalf of whoever becomes the Democratic Party's eventual presidential nominee. "I can't wait to get back on the campaign trail and campaign as hard as I can for whoever is the eventual nominee and for candidates up and down the ballot," he said in a video message to supporters.

With Booker's exit Monday, the 2020 field of Democratic candidates now stands at 12.