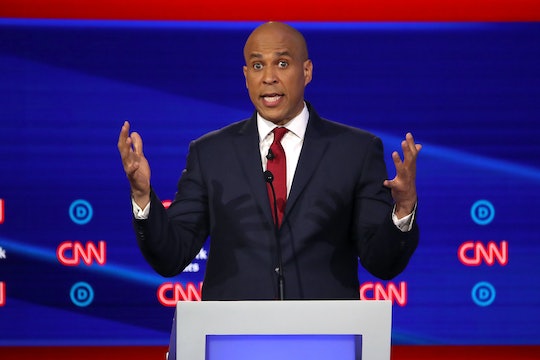 Cory Booker Says I'm A Person. Will My Sons See Me The Same Way?

During the fourth Democratic presidential primary debate in Ohio, candidate and New Jersey Senator Cory Booker declared that "women are people," a statement that was met with applause. The moment came after fellow candidate and Senator from California Kamala Harris brought up reproductive rights during a discussion on health care.

"Women should not be the only ones taking up this cause and this fight," Booker said at the debate, which was telecast by CNN. "It's not just because women are our daughters and our friends and our wives. It's because women are people."

While Booker gave viewers a "yaaaaaas" moment in urging men to be as invested in the continued access to safe, legal, affordable abortion care as women are, I didn't find his declaration that women, in fact, people, to be a celebratory moment (and it should be noted that men have abortions, too). With my two sons, ages 5 and 11 months, asleep in their beds, I sat on the couch and, as the candidates moved on to questions about their age, health, and Ellen-esque friendships with people on the other side of the political aisle, I contemplated the kind of world I am raising children in. The kind of world that requires a politician vying for the presidency to state that, yes, more than half the population of the United States is in fact human.

The kind of world that has positioned the statement "women are people" as something political, debatable, and applause-worthy.

Yes, to my sons I am "mom." Or momma. Or mommy. I am, at the moment, a homogenous person with a single purpose: feeding them and clothing them and buying the occasional toy and kissing the random owie and reading the same book over and over and over again. I am less of a person and more of a yogurt-dispensing, cuddle-loving, best-bacon-making meat-sack of maternal devotion.

Because one day I want my sons to know that I'm also a sexual assault survivor. Will that help them see me as a person?

The current president of the United States has been accused of sexual assault, harassment, and/or rape by over 50 women, according to allegations contained in a new book by Barry Levine and Monique El-Faizy, yet he still holds office. His admission of sexual assault in an Access Hollywood tape wasn't enough to keep him from winning the 2016 election, his defense that his accusers are not attractive enough to assault was not enough to gain the condemnation of the Republican party, and his continued defense of other men accused of sexual assault, harassment, and/or rape is not enough to establish who this president considers worthy and who he does not.

Do the one in five women and the one in 71 men who are victims of sexual assault count as people? The message this country is sending all of us is a resounding no.

And it's not difficult to see that, if my sons are to view me as a person someday, our country has to change.

I want my sons to know that I am also a person who has had an abortion. That like the one in four women who will have at least one abortion in their lifetime — 59% of which are moms — as well as trans men, nonbinary people, and other members of the LGBTQ+ community, I ended an unwanted pregnancy when I wasn't ready, willing, or able to be the perpetually-late-to-Kindergarten-drop-off and Goldfish-cracker-dispensing mom I am today.

But with 90% of U.S. counties without an health care clinic that provides abortion care, four states in 2019 passing "personhood" laws that ban abortion as soon as a fetal heartbeat is detected, and people in positions of power who view pregnant people as "host bodies" (hat tip Florida Rep. Jose Oliva) and aim to imprison people who have abortions, will my sons think me less of a person if I share my abortion story with them? Will they see me, or will they see a ward of the federal government who should be forced to carry a pregnancy to term against her will?

Will they see me as an employee worthy of protection, even though this country doesn't have mandatory paid family leave, pays mothers less than fathers and women less than men, and discriminates against pregnant people in the workplace?

Will they see me as a Puerto Rican person and U.S. citizen at once, given Puerto Rico has been a colony of the U.S. since 1898 and the death of 3,057 of my fellow Puerto Ricans during and after Hurricanes Maria and Irma is being denied by the president of the United States?

Will they see me as one of the many people that make up "We The People" even though only 25% of Congress is made up of women?

I hope the answer is yes. I hope that, by the time my sons are able to view me as a multifaceted human being, abortion access will be safe, legal, affordable, and available to all, rape culture will be a thing of the past, and abusers in positions of power (and the institutions that enable them) will be torn down. I hope there will be equal representation in Congress, more women will have a seat at the proverbial table, and we will all gain equal pay for equal work.

One day, soon, I hope my sons will know that their mom is a person. And as I contemplated how an affirmation of the personhood of women was a *moment* in a 2019 presidential election, it didn't take long to recall all the ways we've been, as a country, pushed to a political and cultural moment that makes Booker's comment a necessity.

It's not difficult to see that, if my sons are to view me as a person someday, our country has to change.

More Like This
What Foods Fight Nausea During Pregnancy?
OB-GYNs Explain The Connection Between Stress & Miscarriage
Is Raspberry Leaf Tea Safe To Drink During Pregnancy?
Is It Safe To Pump While Pregnant? Experts Weigh In
What Parents Are Talking About — Delivered Straight To Your Inbox